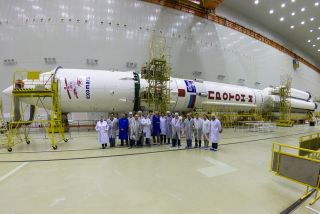 The ExoMars spacecraft and its Proton rocket, inside a facility at Kazakhstan’s Baikonur Cosmodrome on March 5, 2016.
(Image: © KhSC)

Two European Mars spacecraft have been mated to the rocket that will blast them toward the Red Planet on Monday (March 14).

The Trace Gas Orbiter (TGO) and Schiaparelli lander, which together constitute the first part of the two-phase ExoMars mission, were attached to their Russian Proton rocket at Baikonur Cosmodrome in Kazakhstan over the weekend, European Space Agency (ESA) officials said.

Engineers also carried out an electrical test of TGO in a simulated launchpad configuration to gauge how things will go at liftoff, which is scheduled to take place at 5:31 a.m. EDT (0931 GMT; 3:31 p.m. local Kazakhstan time) Monday.

If all goes according to plan, TGO and Schiaparelli will arrive at Mars in October. The orbiter will then begin a five-year search for methane and other potential signs of life in the Red Planet's atmosphere, and also map near-surface hydrogen deposits, which could reveal hidden reserves of water ice. Schiaparelli, meanwhile, will head down to the surface.

ExoMars team members hope the lander gathers environmental data for a few days after it touches down (until the craft's batteries die), but Schiaparelli's main job is to prove out entry, descent and landing technology for the second phase of the mission — a deep-drilling, life-hunting Mars rover, which is scheduled to launch in 2018.

TGO's observations will help mission planners select a landing site for this rover, and the orbiter will also help relay communications from the surface vehicle back to Earth.

ESA leads the ExoMars mission and is responsible for developing most of the spacecraft hardware. ESA is collaborating on the project with Russia's federal space agency, Roscosmos, which is providing Proton rockets for both launches, a landing system for the 2018 rover and some scientific instruments.

ESA had originally partnered with NASA on ExoMars, but the American space agency dropped out in early 2012, citing budget issues.