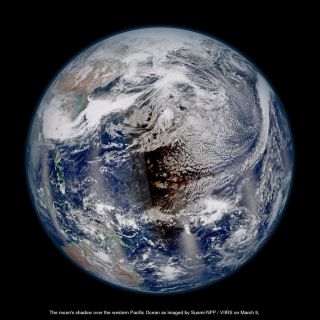 The shadow of the moon is clearly visible on Earth's Pacific Ocean in this spectacular full-planet view of the total solar eclipse of March 8/9, 2016 from space by the NASA-NOAA Suomi-NPP satellite.
(Image: © NASA/NOAA/GSFC/Suomi NPP/VIIRS)

The most breathtaking satellite view so far of the 2016 total solar eclipse comes from NASA's Suomi-NPP. The Earth-watching satellite used its VIIRS instrument to capture a view of the moon's shadow on Earth's Pacific Ocean during the eclipse.

Another image was captured by NASA's Aqua satellite at 10:05 p.m. EST Tuesday (0305 GMT on Wednesday, March 9). It provides a bird's-eye view of the total solar eclipse, which was visible from the ground only along a 90-mile-wide (145 kilometers) path that stretched through Sumatra, Sulawesi, Borneo and other islands eastward into the Pacific northeast of Hawaii.

Tuesday's event was seen as a partial solar eclipse by skywatchers in a much broader swath that included Hawaii and parts of Alaska, Australia and Southeast Asia.

There will be no more total solar eclipses this year. However, on Sept. 1, parts of Africa will be treated to an "annular eclipse," in which the moon blots out most of the sun but leaves a ring blazing around the outside of the solar disk.

And skywatchers in the United States should circle Aug. 21, 2017 on their calendars. On that date, a total solar eclipse will be visible from a path that stretches from Oregon all the way to South Carolina — a highly anticipated event that has been dubbed the "Great American Eclipse."

Editor's note: If you safely captured an amazing photo of Tuesday's total solar eclipse and would like to share it with us and our news partners for a story or gallery, send images and comments in to Managing Editor Tariq Malik at spacephotos@space.com.