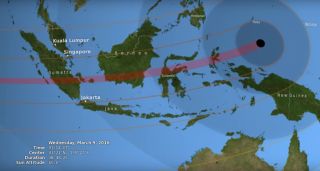 Observers in parts of Southeast Asia will be treated to a celestial spectacle next week — a total eclipse of the sun.

The total solar eclipse will occur Wednesday (March 9) local time (Tuesday, March 8, EST). It will begin over the Indian Ocean, then darken sections of Sumatra, Borneo, Sulawesi and other islands before petering out in the Pacific Ocean northeast of Hawaii, as shown by this NASA eclipse animation. (People in a much larger swath of the planet — including parts of China, Japan, northern Australia, Hawaii and Alaska — will be able to see a partial eclipse.)

People living in the "path of totality" are lucky, for a total eclipse is quite a sight to behold. You can watch next week's total solar eclipse live in a webcast hosted by the Slooh Community Observatory. The Slooh broadcast willbegin March 8 at 6 p.m. EST (2300 GMT) and will stretch until 9 p.m. EST (2600 GMT). You can also watch the webcast on Space.com, courtesy of Slooh. [Total Solar Eclipse of 2015 in Amazing Photos]

"The moon blocks the light of the sun's surface very, very precisely," Sarah Jaeggli, a space scientist at NASA’s Goddard Space Flight Center in Greenbelt, Maryland, said in a statement. "You can see all the way down to the roots of the corona, where the atmosphere meets the sun's surface."

Those hoping for clear skies along the path of totality are at the mercy of a humid, unstable atmosphere that produces rainclouds easily. In fact, meteorologists Jay Anderson and Jennifer West predict that nowhere on land is the chance of clear skies better than about 50 percent.

"Ship-based observers will definitely have an advantage in this eclipse, giving them access to the lowest cloud amounts and a mobile platform to seek out better skies on eclipse day," they wrote in their blog Eclipsophile.

Total solar eclipses occur when the moon passes directly between the sun and Earth — a precise alignment that occurs only about once a year, because the sun and moon don’t orbit in the same plane. (If they did, eclipses would occur once a month).

During a total eclipse, the moon blocks the entire disk of the sun, darkening the sky and letting observers glimpse the sun’s faint outer atmosphere, the corona. WARNING: Never look directly at the sun — not even during an eclipse — without special eclipse glasses or other proper eye protection; serious and permanent damage to your vision can result.

Total solar eclipses wouldn’t occur if it weren’t for happenstance; the sun is 400 times larger than the moon, and it's also 400 times farther away from Earth than our natural satellite. So to our eyes, they appear to be the same size.

If this ratio were tweaked ever so slightly, total solar eclipses wouldn’t occur. But researchers would still be able to study the corona; they have invented an instrument called a coronagraph, which blocks the sun’s bright surface and allows the solar atmosphere to be observed.

Coronagraphs even let astronomers directly image exoplanets. Without the ability to block a distant star's light, tiny and dim orbiting planets could never be glimpsed directly.