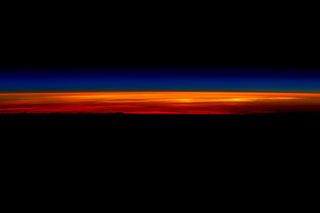 NASA astronaut Scott Kelly tweeted this photo on March 1, 2016, from the International Space Station, calling it his "last sunrise from space."
(Image: © Scott Kelly (via Twitter as @StationCDRKelly))

U.S. astronaut Scott Kelly bid farewell to Twitter at the end of his yearlong mission this morning with a sequence of five sunrise photos before he leaves the International Space Station.

Kelly has broken the American records for most time consecutively spent in space, and data from his and Russian cosmonaut Mikhail Kornienko's stay will help scientists evaluate the best ways to support humans in space for long journeys, such as a trip to Mars.

Amid final preparations to leave with Kornienko and Russian cosmonaut Sergey Volkov, Kelly transferred command of the station to U.S. astronaut Tim Kopra yesterday afternoon. This afternoon (March 1) at 4:15 p.m. EST (2115 GMT) the trio will bid farewell to the other astronauts and begin the process of closing the hatch of their Soyuz craft — and you can watch that process live here on Space.com. The craft will depart from the space station this evening at 8:02 p.m. EST (0102 GMT) and will touch down in Kazakhstan about 3 hours later.

In the meantime, Kelly capped off his year of tweeting from space with a series of photos — his final photos of Earth's sunrise.

Kelly has been documenting his trip from the very beginning, tweeting a "thank you" to Michelle Obama for her best wishes and showing a photo of his crew quarters. Besides showing his daily life and beautiful glimpses of Earth (and playing "guess that location" with Twitter users), he would often tweet sunrise or sunset photos to wish the Twittersphere a good night or good morning. Incidentally, space station astronauts can observe around 16 sunsets per day as they orbit Earth.

Kelly has also reached out through social media — responding to the public through Twitter and also with a recent Reddit thread.

In an interview streamed from NASA TV Feb. 25, Kelly mentioned that he wasn't involved in photography at all before becoming an astronaut — but it's an important part of a space flier's job. The Earth offers such a great canvas, such a unique vantage point, that it's "mandatory" they share it with the public, he said.

"I have taken a lot of pictures because I have been up here for a long time," Kelly said in a news conference from orbit. "Actually, numbers wise, I don't think I have taken that much compared to other crewmembers we have had up here. But I have definitely taken some good ones and some memorable ones." The second most impressive sight he's caught in space, he's said, was a series of spectacular auroras — first place goes to his very first view of Earth from space.

Although he said the sunrise photos would be his last tweets, Kelly dashed off two more before he left — 1,000 tweets!

Remember, you can watch Kelly, Kornienko and Volkov bid farewell to Kopra, British astronaut Tim Peake and Russian cosmonaut Yuri Malenchenko this afternoon and watch their descent after 8:02 p.m EST, with touchdown scheduled for around 11:25 p.m. EST in the Baikonur Cosmodrome in Kazakhstan.