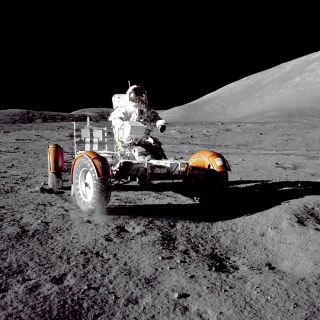 Gene Cernan takes center stage in the new documentary "The Last Man on the Moon." Here, he examines the moon rover during the Apollo 17 mission in 1972.
(Image: © Harrison H. Schmitt)

The new documentary "The Last Man on the Moon" views the Apollo program through the eyes of Gene Cernan, an astronaut who put humanity's most recent footsteps on the moon, in 1972. The movie is out in theaters as of Feb. 26; here are five surprising facts that we learned from this engrossing look at spaceflight history.

Cernan's trips to space were always eventful. Before setting foot on the moon during Apollo 17, Cernan flew two other space missions: Gemini 9A, where he struggled during NASA's second spacewalk ever, and Apollo 10, in which the astronauts did "everything but" land on the moon, including approach the surface in the lunar lander. Cernan said he and astronaut Thomas Stafford forgot to flip a switch as the lunar module prepared to move away from the moon, and the craft flipped end over end eight times in 15 seconds. ['The Last Man on the Moon' Delivers Rare Archive Footage (Video)]

A news broadcast on the Apollo 10 mission was "brought to you by Tang," the powdered orange drink that NASA sent up with astronauts starting with John Glenn's 1962 orbit around the Earth (although NASA didn't invent the beverage). Unrelatedly, Cernan's crewmate found orange duston the moon's surface during their Apollo 17 landing.

Cernan crashed his helicopter into the ocean shortly before NASA was scheduled to select crew members for Apollo 17, which would be the final mission to land on the moon. After the crash, Cernan says he was sure NASA wouldn't select him for the mission — if he couldn't fly a helicopter without incident, how could he command a journey to the moon?

"If you think going to the moon is hard, try staying at home," Cernan's ex-wife, Barbara, is known to have said (and reiterates in the film). At a Q&A following a screening of the film in New York, Cernan said he didn't know Barbara said this until just a few years ago. In the film, he and other former Apollo astronauts talk about being poor fathers and husbands during the height of the program, and Cernan estimates that 60 percent of his Apollo astronaut cohorts got divorced.

Cernan has always had a tight bond with his daughter. After he returned from one of his missions, his daughter, Tracy, didn't seem too interested in hearing about the trip to the moon and back — all she wanted to know was when they could go camping. Last thing before getting into the spacecraft to leave the moon on Apollo 17 (he was the last of the two astronauts to board), he wrote his daughter's initials into the lunar surface.

During the Q&A session with Cernan after the film ended, he discussed turning the lander's engine back on after his three days on the moon. The two crewmembers on the moon's surface had to burn the engine for exactly 7 minutes and 14 seconds to make it off the surface and rejoin the command module. The last official words on the moon, as Cernan climbed the ladder, were "God willing, we shall return," he said. But Cernan revealed the true final statement, which he made as the crew prepared to launch from the lunar surface: "All right, let's get this mother out of here and go home."

Editor's Note: This article has been updated to specify the correct crewmember who flew in the lunar module with Cernan during the Apollo 10 mission.