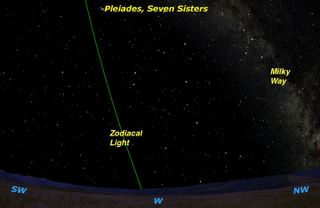 Look for the dim glow of the zodiacal light along the ecliptic just after twilight for the next two weeks.
(Image: © Starry Night Software)

This light is the dim glow caused by millions of tiny particles in the plane of Earth's solar system. The solar system was born more than 4.5 billion years ago as a rotating cloud of gas and dust surrounding the new sun. This cloud coalesced into the objects now known as planets and asteroids, but some of the original dust was left behind.

This interplanetary dust mainly becomes visible when small chunks of it are swept up by the Earth, causing the streaks of light in the upper atmosphere known as meteors. But that primordial cloud is still visible on very dark, moonless nights, especially at times of the year when the ecliptic — the path of the sun through the sky — makes a steep angle with the horizon. [The Best Night-Sky Events of 2016: What to Watch for This Year]

Just as the myriad of faint stars cause the amorphous glow seen as the Milky Way, the collection of tiny dust motes that make up the interplanetary dust cloud merge to form an even fainter glow called the zodiacal light. It is called "zodiacal" because it is densest along the ecliptic or zodiac.

The zodiacal light is best seen in the evening sky in the months of February and March at the time of the waning moon, which doesn't rise until after midnight. You must be at a totally dark observing site, without the slightest trace of light pollution.

There is an even rarer manifestation of the interplanetary dust cloud. Like the reflective letters on a road sign, these dust particles reflect light most strongly in the direction from which they are lit. So on the very darkest of nights, when the cone of the zodiacal light reaches the zenith near midnight, there is a faint brightening directly opposite the sun in the sky, known by the German word "gegenschein," meaning "counterglow."

However, with the increasing light pollution everywhere in the world now, even at the darkest observing sites, the gegenschein is almost never seen today.

Editor's note: If you capture an amazing photo of the night sky and you'd like to share it with us and our partners for a story or image gallery, send images and comments in to managing editor Tariq Malik at spacephotos@space.com.