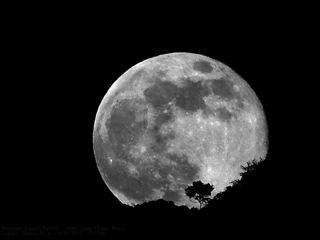 Look to the skies tonight and tomorrow to see Jupiter and the full moon close together.

Jupiter, the largest planet in the solar system, shines as a brilliant silvery "star" in the constellation Leo low in the eastern sky as the evening twilight is ending around 7:15 p.m. local time. This week, this giant planet is ready for telescopic observing by 9:30 p.m., when it will stand about one-third of the way up from the horizon, above any ground-based haze or atmospheric turbulence.

Tonight (Feb. 22), Jupiter will be within 13 degrees of the full moon. But be sure to check the sky on Tuesday evening (Feb. 23), when Jupiter will be sitting just 2 degrees to the upper left of a nearly full moon, just one night past full phase. (For reference, the apparent width of the full moon is one-half a degree on the sky). Usually when the moon is this bright, it will overwhelm most stars that are this close to it, but not Jupiter. I'm sure not a few folks who take a casual look at the moon on this night will wonder what that bright object is sitting just off to its left. Maybe some will call their local radio station or police station to report a UFO! [The Best Night-Sky Events of 2016: What to Watch for This Year]

And if clouds prevent you from seeing the moon pair off with Jupiter on Tuesday night, don't fret. You'll get another chance to see a repeat performance on March 21, when once again, Jupiter will be shining a little over 2 degrees to the upper left of the nearly full moon (two nights before full phase). It reaches its highest position in the south around 1 a.m. local time and is heading toward its setting in the west after sunrise.

Jupiter will arrive at opposition to the sun on March 8 and thereafter will appear to climb higher in the evening sky in the weeks to come.

To me, "Big Jupe" is the most consistently interesting object in the solar system after the moon and the sun and has always held a special place in the hearts of telescope users. Besides the prominent cloud belts on its surface, the smallest telescope — even steadily held 7-power binoculars — will reveal the four brightest satellites of Jupiter as tiny stars arranged in line as they revolve around the planet in orbits nearly edgewise to the Earth. When Jupiter is close to the moon on Tuesday evening, for example, viewers will see three satellites (Callisto, Ganymede and Io) on one side of Jupiter, while the fourth (Europa) remains all by itself on Jupiter's opposite side. If you watch between 8 and 9 p.m. EST, you can see Ganymede pass close to Io; a fascinating sight to observe as the two moons ever-so-slowly shift their positions relative to each other over just an hour's time.

Editor's note: If you capture a stunning view of Jupiter and the moon, or any other night sky view, and you'd like to share it with Space.com and our news partners, send images and comments in to: spacephotos@space.com.