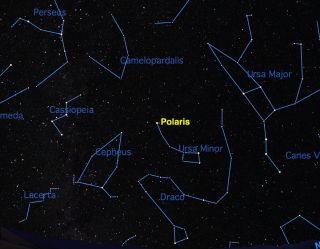 We sometimes take the circumpolar constellations for granted, because they are always with us.
(Image: © Starry Night Software)

Experienced stargazers look forward to the changes in the seasons that bring new constellations into view.

The appearance of Orion (The Hunter) tells us winter is on the way, and Boötes (The Plowman) marks the beginning of spring. But we tend to take the circumpolar constellations somewhat for granted, because they are always with us.

Because we live on a spherical planet, we can only see part of the sky. If we look toward the celestial pole — north or south, depending on where we live — we see the same constellations all year around, which are called the circumpolar constellations. I live close to 45 degrees north latitude myself, so I can always see the stars within 45 degrees of the north celestial pole. [5 Dawn Planets And A Dusk Comet In Feb. 2016 Skywatching (Video)]

This week's chart shows the view at 9 p.m. from my location. Facing north, there is a moderately bright star half way up the sky — Polaris, the northern pole star.

Many people who are unfamiliar with the night sky think that Polaris is the brightest star in the night sky, partly because of a pop song of a few decades ago, Gerry Rafferty's "Right Down the Line." The song includes the following lyrics:

"You've been as constant as a northern star / The brightest light that shines."

In fact, Polaris is a middling star, somewhere around the 50th-brightest star in the sky. It is only important because of its current position within a degree of the north celestial pole. There are no other bright stars near Polaris, so it tends to stand out.

Polaris marks the end of the handle of the Little Dipper, the popular name for the constellation Ursa Minor (The Little Bear). This constellation is hard to see in city skies because four of its seven main stars are quite faint. Only Polaris, at the end of its handle, and Kochba and Pherkad, at the bowl end, are third-magnitude or brighter. (On the scale astronomers use, lower magnitudes denote brighter objects.)

The two brightest circumpolar constellations are Ursa Major and Cassiopeia. Ursa Major is Latin for the Great Bear, but its seven brightest stars are best known in North America as the Big Dipper, or in the British Isles as the Plough.

All but one of the stars in the Big Dipper are second-magnitude in brightness, making this pattern easy to spot. The faintest star is Megrez, where the handle joins the bowl. The most famous star is the Mizar, in the middle of the handle. Mizar was known as a double star from antiquity, with the ability to spot its companion Alcor being a test for acute vision. When astronomers first turned their telescopes on Mizar early in the 17th century, they saw that Mizar itself was a telescopic double, the first to be discovered.

Ursa Major is close to the north pole of our galaxy, the Milky Way, so it contains a large number of external galaxies. One of the most famous is the Whirlpool Galaxy, just north of the line between Mizar and Alkaid, the star at the end of the handle. The Whirlpool Galaxy is very hard to see except under very dark country skies, because it is face-on to us.

My favorite galaxies are the contrasting pair Messier 81 and Messier 82, located close to the Bear's snout. Messier 81 is a perfect bright oval, while Messier 82, seen edge on, is more cigar-shaped in the telescope.

Directly across the pole from Ursa Major is the other main circumpolar constellation, Cassiopeia, which consists of five second-magnitude stars in a characteristic "W" shape. Cassiopeia contains many bright star clusters, including Messier 52 and Messier 103. My favorite is NGC 457, the Owl Cluster, close to the left angle at the bottom of the "W." This is popularly known as the "E.T. Cluster" because of its striking resemblance to the title character in the 1982 Steven Spielberg film.

There are several other dimmer circumpolar constellations, including Perseus, Cepheus and Draco. There is also one with the wonderful name Camelopardalis, Latin for "Giraffe," which contains no bright stars and is just about impossible to make out from the background stars.

If you live in the southern hemisphere, you will never get to see any of these constellations because they are forever below your northern horizon. But then, you have the Magellanic Clouds and the Southern Cross, which more than make up for what you miss in the north.

Editor's note: If you capture an amazing photo of the night sky and you'd like to share it with us and our partners for a story or image gallery, send images and comments in to managing editor Tariq Malik at spacephotos@space.com.