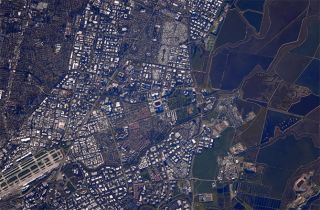 "Got to see the #SuperBowl in person after all! But at 17,500MPH, it didn't last long. #YearInSpace" said NASA astronaut Scott Kelly on Sunday after he orbited over California. Levi's Stadium is the oval shape in the center of the photo.
(Image: © NASA/Scott Kelly)

Kelly took to social media to share a now-viral shot of Levi’s Stadium, in Santa Clara, Calif., taken as the International Space Station whizzed above the big game at 17,500 miles per hour.

NASA only recently began beaming the Super Bowl to astronauts in real time. It’s not immediately clear which team Kelly was rooting for from low Earth orbit.

Having now been in space longer than any other American astronaut, Kelly is currently spending 12 months aboard the space station as part of the One Year Mission, an effort to study the long-term effects of space flight on the human body.

NASA is closely watching Kelly — and his twin brother, Mark Kelly, on Earth — to track his body’s reaction to extended weightlessness, isolation, radiation and stress as preparation for the agency’s eventual journey to Mars.