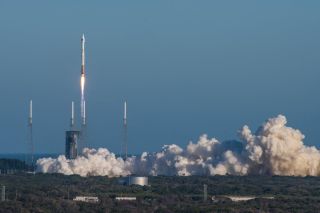 The final addition to a group of global positioning satellites successfully launched into orbit this morning.

The GPS IIF-12 satellite took off today (Feb. 5) aboard an Atlas V 401 rocket from Complex 41 at Cape Canaveral Air Force Station in Florida at 8:38 a.m. EST (1338 GMT). The satellite was built by Boeing, and is operated by the U.S. Air Force. It is the 12th and final block IIF global positioning system satellite to launch.

"This is a significant milestone for GPS, the 50th GPS satellite to be delivered on-orbit," said Lt. Gen. Samuel Greaves, Space and Missile Systems Center commander and Air Force program officer for space, in a statement from Patrick Air Force Base in Cape Canaveral. "The GPS IIF satellite performance has been exceptional and is expected to be operational for years to come." [The Most Destructive Space Weapons Concepts]

The Atlas V rocket is built by United Launch Alliance (ULA), a joint venture between Boeing and Lockheed Martin. As with previous IIF satellite launches, the rocket was in a 401 configuration, which consists of a 4.2-meter (13.7 feet) payload fairing and two booster stages.

GPS satellites fly at an altitude of about 12,550 miles (20,200 km), and provide global positioning, navigation and timing services to both civilians and military personnel.

The IIF-12 launch date was initially delayed when ULA officials were alerted to a possible problem with electrical connectors in the Atlas V booster. In a media briefing Jan. 29, Walter Lauderdale, the GPS IIF-12 mission director, said the problem was fully investigated and solved, but delayed the launch by "a couple of days."

"We took the time to inspect all the subject connectors and verified the integrity of those connectors," Lauderdale said. "Frankly, a day or two delay cannot possibly compare to the loss of a vital national asset. That is the nature of a sharp focus on mission success."

During a live broadcast of the launch, Dan Hart, vice president of government satellite systems for Boeing, spoke about the improvements of the IIF series from previous series used in this GPS constellation. According to Hart, the IIF satellites have improved clocks; a jam-resistant military signal; and a new, dedicated civilian signal that is particularly useful for commercial aviation and search-and-rescue operations.