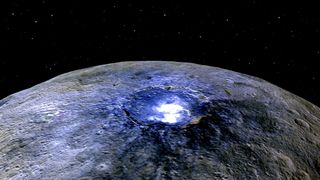 215 years after its discovery, we know so much more about the dwarf planet Ceres. NASA's Dawn spacecraft captured this amazing view of Ceres in the asteroid belt, showing the dwarf planet's Occator Crater in false color, after it arrived in orbit around Ceres in 2015.
(Image: © NASA/JPL-Caltech/UCLA/MPS/DLR/IDA)

The dwarf planet Ceres was first glimpsed through a telescope 215 years ago, and as researchers learn more than ever, they continue to be amazed by the object.

NASA's Dawn mission arrived at the dwarf planet last year and saw odd features that observers are still trying to figure out: more than 130 reflective areas are likely made up of salt, and the small body also hosts a rather large, cone-shaped mountain.

But back when Ceres was discovered, Piazzi didn't quite understand what he was looking at. After his first observation on Jan. 1, 1801, he noticed that the object had changed position slightly on his next observing night. His first suspicion was that it was a comet, but he also had evidence that the object might be something else.

"I have presented this star as a comet, but owing to its lack of nebulosity, and to its motion being so slow and rather uniform, I feel in the heart that it could be something better than a comet, perhaps," Piazzi wrote to fellow astronomer Barnaba Oriani.

Piazzi also wrote to astronomer Johann Elert Bode, who devised a mathematical formula that he said would predict the locations of planets in the solar system relative to the sun. There was an undiscovered planet, the formula said, between Mars and Jupiter. For this reason, Ceres caught Bode's attention. Bode had already marshaled a group of astronomers to search for an object in that region, and he was determined to uncover more information. (We now know that the formula merely outlined a coincidence in the planets' positions.)

Piazzi spoke to the press about his finding, but he did not give his data to other astronomers. This made things difficult when he fell ill and was unable to continue his observations. In February of that year, Paris-based astronomer Jérôme de Lalande asked for some data from Piazzi, who provided it in April, after he had recovered. One of Lalande's students, Johann Karl Burckhardt, then calculated that the orbit of Ceres appeared to be circular, unlike a comet's.

But by the spring of 1801, no one had been able to see the new object besides Piazzi, because the skies had been cloudy. Also, by that time, Ceres was so close to the sun, from Earth's perspective, that it couldn't be seen at night. There was a real risk of losing it in the skies forever. After immense pressure from other astronomers to make his observations public, Piazzi published the data in July. Ceres was finally spotted again in December 1801 by astronomer Franz Xaver von Zach, using projections from mathematician Carl Friedrich Gauss.

Astronomers still debated about the status of Ceres — comet, planet or something else — until other objects like it were discovered between Mars and Jupiter. These findings included Pallas (1802), Juno (1804) and Vesta (1807). Astronomer William Herschel suggested that these smaller objects be called "asteroids," because they appear starlike in telescopes.

Today we have found hundreds of thousands of asteroids in the main belt between Mars and Jupiter. Ceres was reclassified as a dwarf planet in 2006 along with Pluto, due to its size and circular shape. Researchers have viewed it with the Hubble Space Telescope and up close with NASA's Dawn mission, which is orbiting the dwarf planet.

Dawn is currently in its lowest orbit ever, just 240 miles (385 kilometers) from Ceres' surface, where it will reveal even more about the mysterious dwarf planet.