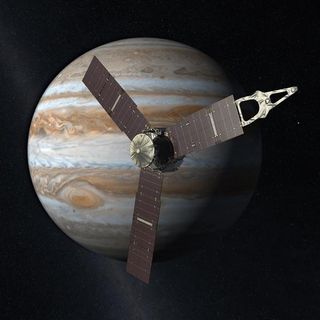 Artist's illustration of NASA's Juno spacecraft at Jupiter. The probe will enter orbit around the solar system's largest planet on July 4, 2016.
(Image: © NASA/JPL-Caltech)

A NASA spacecraft now has Jupiter more squarely in its sights ahead of its July 4 arrival at the solar system's largest planet.

"This is the first of two trajectory adjustments that fine-tune Juno's orbit around the sun, perfecting our rendezvous with Jupiter on July 4 at 8:18 p.m. PDT [11:18 p.m. EDT; 0318 GMT on July 5]," Juno principal investigator Scott Bolton, of the Southwest Research Institute in San Antonio, said in a statement.

The second of these engine burns is scheduled to take place on May 31, NASA officials said.

Juno will perform its science work from orbit. The nominal mission plan calls for the 4-ton spacecraft to zip around Jupiter 33 times, coming within just 3,100 miles (5,000 km) of the planet's cloud tops once every 14 days, NASA officials said.

Juno carries three 30-foot-long (9 m) solar panels, which together hold a total of 18,698 individual solar cells. Such extensive light-collecting gear is necessary to power the spacecraft in the relatively dim environment around Jupiter, which orbits more than five times farther from the sun than Earth does.

Last month, Juno became the farthest-flung solared-powered probe in spaceflight history. The previous record was held by the European Space Agency's comet-chasing Rosetta spacecraft, which got a maximum of 492 million miles (792 million km) from Earth in October 2012.