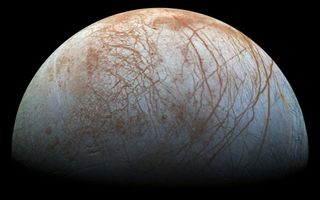 The Galileo spacecraft traveled around the Jovian system in the late 1990s, collecting data on Europa, Jupiter's frozen moon. After retouching the data using updated calibrations, scientists produced an image that represents what the moon may actually look like. The lengthy scores across the moon's surface seem to confirm data that under the icy crust a liquid ocean flows. This exciting news of liquid water in deep space raises questions of thriving life beyond Earth. [Learn more about Europa.]