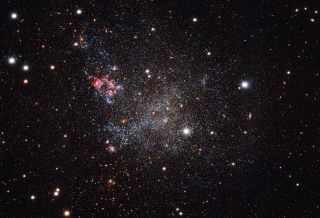 Dwarf galaxy IC 1613, as seen by the Very Large Telescope's (VLT) OmegaCam camera, showcasing its lack of cosmic dust. The VLT is part of the European Southern Observatory, located in Chile.
(Image: © ESO)

A small, nearby galaxy boasts very little cosmic dust, making it easier for telescopes to capture an incredible new image of its "squeaky clean" expanse.

The dwarf galaxy IC 1613's lack of dust allowed the European Southern Observatory's (ESO) Very Large Telescope in Chile to get an extra-sharp picture of the galaxy, which ESO officials have dubbed a "clean freak." ESO scientists created a video that zooms in on the squeaky clean galaxy.

Like the Milky Way, IC 1613 is part of the Local Group, a collection of more than 50 galaxies near our own. IC 1613 is about 2.3 million light-years from Earth, making it "close," in the cosmic sense. Because it's so near, it's been studied frequently. Astronomers previously discovered that it is an irregular dwarf galaxy that doesn't have certain features, such as a starry disc, found in similar galaxies. [Photos: 65 All-Time Great Galaxy Hits]

"However, what IC 1613 lacks in form, it makes up for in tidiness," ESO officials said in a statement. "We know IC 1613's distance to a remarkably high precision, partly due to the unusually low levels of dust lying both within the galaxy and along the line of sight from the Milky Way — something that enables much clearer observations."

Estimating distances is even easier for IC 1613 because it is embedded with two kinds of variable stars, called Cepheid variables and RR Lyrae variables. These stars pulse in a predictable way, allowing astronomers to estimate the distance based on the pulsars' brightness. Astronomers dub these kinds of stars "standard candles" because they act as convenient measuring sticks to better evaluate the size of the universe.

"Using standard candles — such as the variable stars within IC 1613 and the less-common Type Ia supernova explosions, which can [be] seen across far greater cosmic distances — astronomers have pieced together a cosmic distance ladder, reaching deeper and deeper into space," ESO officials said in the statement.

IC 1613 was discovered in 1906 by German astronomer Max Wolf, and was studied in more detail by Walter Baade at Mount Wilson Observatory in California in 1928. Baade's work showed astronomers that the galaxy must be very close, as its individual stars showed up like pinpricks in his telescope. This would only be possible if IC 1613 was near Earth, he suggested.