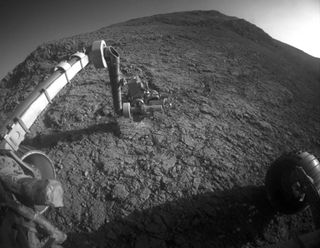 NASA's Opportunity Mars rover just keeps rolling along, a dozen years after touching down on the Red Planet.

Opportunity landed on Mars 12 years ago Sunday (Jan. 24), a few weeks after its twin, Spirit, hit the red dirt. (Opportunity's landing occurred on Jan. 25, 2004, in the GMT time zone, but it was still Jan. 24 in the PST time zone, where the rover's home base, NASA's Jet Propulsion Laboratory in California, is located.) The two robots were tasked with finding signs of past water activity on Mars, and both of them quickly turned up plenty of evidence near their disparate landing sites.

While Opportunity has suffered some memory problems in the past year, its solar panels are working well, rover team members said. The robot has been able to keep working through the minimum-power months of the southern Martian winter instead of staying still to conserve energy. (The southern winter solstice occurred Jan. 2.)

"Opportunity has stayed very active this winter, in part because the solar arrays have been much cleaner than in the past few winters," Mars exploration rover project manager John Callas, of the Jet Propulsion Laboratory, said in a statement.

This month, Opportunity's rock abrasion tool carved the crust of a rock target nicknamed "Private John Potts" after a member of Lewis and Clark's expedition. Opportunity is working on the south side of a feature called Marathon Valley, to take advantage of the sun crossing the northern sky.

Over the years, Opportunity's controllers have developed new techniques to keep the rover going even in minimum-power situations. They take advantage of sun-soaked areas of the Martian terrain and try to pick spots that are a little breezy, to clear dust off the panels. This prevents lengthy work outages, such as a four-month stay on the sidelines that Opportunity experienced during its first Mars winter.

The golf-cart-size rover has been exploring the rim of Endeavour crater, which is 14 miles (22 kilometers) wide, since August 2011. Its work in Endeavour's Marathon Valley should conclude this year, NASA officials said.

Opportunity has traveled 26.5 miles (42.65 km) on Mars to date — more than a marathon, and farther than any other robot has ever traveled on the surface of a world beyond Earth.

Opportunity is one of two active NASA rovers on the Red Planet; the car-size Curiosity rover touched down in August 2012, and is currently exploring the foothills of the 3-mile-high (5 km) Mount Sharp, far from Opportunity's location.