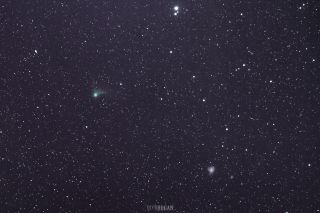 The Pinwheel Galaxy and Comet Catalina shine in this skywatcher image. Astrophotographer Greg Hogan took this image on Jan. 18, 2016 from Kathleen, GA.

"I was clouded out the previous days, so had to zoom out with a prime lens at 85mm to get a widefield shot. It still came out pretty good I think," Hogan wrote in an email to Space.com.

This comet is coming from deep space, probably out in the Oort cloud, far beyond the orbit of Neptune. Like many comets, Catalina has two tails, one made of dust and one of gas. [See more photos of Comet Catalina by stargazers]

The Pinwheel Galaxy, which is also known as Messier 101 or NGC 5457, is a spiral galaxy 21 million light-years away in the constellation Ursa Major. The galaxy was first discovered by Pierre Méchain on March 27, 1781. Charles Messier confirmed its position and it was included in the astronomer's famous Messier Catalogue as one of the final entries.