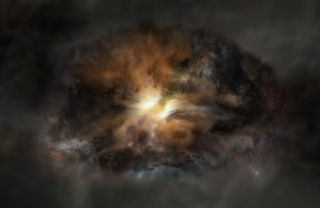 An artist's image of the most luminous galaxy ever observed, which is destroying itself from within. If all the galaxies in the universe lay at the same distance from the sun, this one would shine the brightest.
(Image: © NRAO/AUI/NSF; Dana Berry / SkyWorks; ALMA (ESO/NAOJ/NRAO))

The most luminous galaxy ever observed is tearing itself apart from the inside out.

A new study reveals that the black hole at the center of this galaxy, which is responsible for making the galaxy so incredibly bright, is also generating turbulence throughout it.

"The galaxy is tearing itself apart," Roberto Assef, an astronomer with the Universidad Diego Portales in Santiago, Chile, said in a statement from NASA. The momentum and energy of the light coming from the region around the black hole "are so great that they are pushing the gas out in all directions," he said. [The Strangest Black Holes of the Universe]

Located 12.4 billion light-years from Earth, the galaxy W2246-0526 was identified in 2015 as the most luminous galaxy known, based on data collected by NASA's Wide-field Infrared Survey Explorer (WISE). With the highest light output of any galaxy observed to date, it would shine the brightest of all the galaxies in the universe if they lay at an equal distance from the sun, the statement said.

As with most galaxies, the center of W2246-0526 hosts a supermassive black hole, a powerful engine that gorges on gas and dust. The material that flows toward the black hole creates an accretion disk around it, and according to NASA, the friction in this disk creates a powerful glow that shines more brightly than 300 trillion suns.

The galaxy's extreme luminosity may be a sign of what is tearing it apart.

Some of the material in the accretion disk streams away from the galactic center in the form of cosmic "winds." While many supermassive black holes have winds, they usually flow in a specific direction, but the researchers say their results show that in W2246-0526, "winds" of turbulent material have been found throughout the galaxy.

"It is like a pot of boiling water being heated up by a nuclear reactor in the center," lead author Tanio Diaz-Santos, a postdoctoral fellow at the Universidad Diego Portales in Santiago, Chile, said in a statement from NASA. Diaz-Santos was part of a team led by Assef that used the Atacama Large Millimeter/submillimeter Array (ALMA) in Chile to examine the galaxy known as W2246-0526.

"The 'boiling' gas is not [only] in the accretion disk," said WISE project scientist Peter Eisenhardt. "The whole galaxy is being disturbed."

Whether the gas is being blown completely out of the galaxy or will fall back into it remains unknown.

"A likely finale would be that the galaxy will blow out all of the gas and dust that is surrounding it, and we would see the accretion disk without its dust cover — what we call a quasar," Assef said. A quasar is a galaxy with a bright region around its central black hole.

W2246-0526 is one of a rare class of objects called hot, dust-obscured galaxies, or Hot DOGs, which make up only about 1 out of every 3,000 galaxies observed by WISE. These powerful collections of stars host a supermassive black hole at their center (which is typical of most galaxies). What makes Hot DOGs unique are clouds of dust that obscure most of their light, blocking much of the visible light emitted by the galaxies.

With its infrared instruments, WISE was capable of observing the objects before its mission ended in 2011.

The research was published online in The Astrophysical Journal Letters.