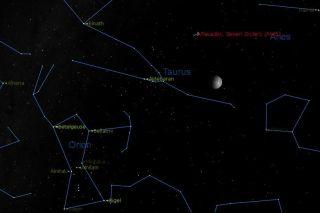 The constellation Taurus as seen in the sky Monday, Jan. 15 at around 9:30 p.m.
(Image: © Starry Night Software)

Get ready to spot a well-known constellation "charging in" this week, ready to dazzle.

One of the brightest and best-known constellations is situated high in the southern sky at around 9:30 p.m. local time this week.

The constellation, which contains one of the brightest and most colorful stars in the sky and two of the most beautiful open-star clusters, is a member of the zodiac and looks a lot like the creature it is supposed to represent. The star pattern in question is Taurus the Bull. [January 2016 Skywatching: Orange Giant Star, Planets and More (Video)]

In a number of languages, the word for constellation literally means "star picture" — for example, the German sternbild. Some constellations represent what they are because the stars form an easily perceived pattern of the subject, but in most cases this is far from the truth. There are exceptions, however, and Taurus is one of them, for it indeed resembles a stick figure of a fierce and mighty beast.

The oldest star patterns recognized today likely date from the earliest Middle Eastern peoples, particularly those, such as the Sumerians, who inhabited the Tigris-Euphrates region. They used pictures of constellations, such as Taurus, on their pottery, tablets and cylinder seals. Taurus represents the bull form that Jupiter took to carry off the young princess, Europa, in legend — but only the forepart of the Bull got into the sky.

Taurus' head is lowered menacingly; here we find a bright orange-red star at the end of the lower arm of the V, which represents the Bull's fiery eye. That's Aldebaran, from the Arabic "Al Dabaran," meaning "The Follower" of the Pleiades; from mid-northern latitudes Aldebaran rises about 80 minutes after the beautiful Pleiades star cluster, and pursues them across the sky. The Pleiades are located in the Bull's shoulder, while the V is yet another famous star cluster known as the Hyades.

Ancient stargazers chose four bright stars as "royal stars," famous among both astrologers and ancient navigators. Each star was identified with one of the four seasons. Aldebaran was one of the four and was the star associated with winter.

Taurus is also recognized as one of the 12 constellations that forms a belt encircling the sky from west to east — a belt called the zodiac. It is toward the zodiac we must look to find the sun, moon and planets. In 2016, the moon's path through the zodiac will cause it to pass in front of Aldebaran each month, giving different parts of the world a chance to watch a stellar eclipse, which astronomers refer to as an occultation. On Jan. 19, one of these occultations will be visible across most of the United States and Canada. Several others will be visible from North America during the course of the year.

"Butting in" on Orion

Perhaps the best earthly example of the type of bull that Taurus represents might be the yak bull, though Taurus's horns are strangely long and straight for a bull, each tipped with a star. The brighter of these stars — El Nath — is appropriately known as "The Butting One."

In the old-time allegorical star atlases, we see Orion, the Mighty Hunter, with his club upraised in his right hand, while using a lion skin as a shield. In the sky, he seems to be readying himself to do battle with Taurus, who is charging down on him. If you follow Orion's famous three-star belt upward and to the right you'll be taken almost directly to Aldebaran and the Hyades. [Skywatching 2016: The Year's Must-See Events (Infographic)]

The Hyades are among the nearest of the star clusters, which explains why so many of the separate stars can be seen. At a distance of 150 light-years, the Hyades are moving in the general direction of the star Betelgeuse in Orion while receding from the Earth at 100,000 miles per hour.

Although it fits perfectly into the V-shaped face formed by the Hyades, Aldebaran is not a member of that cluster at all. Rather, it's an innocent bystander that is in reality positioned much closer to us at a distance of some 67 light-years. Aldebaran is moving toward the south almost at right angles to the motion of the Hyades stars and about twice as fast. Taurus's V-shaped head is, therefore, going to pieces. For 25,000 years or more it will pass for a V, but after 50,000 years it will be quite out of shape.

A "hori-bull" fate for such a noble constellation!