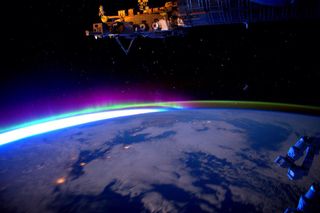 Like their cohort on the ground, astronauts aboard the U.S. segment of the International Space Station will take a day off today (Jan. 18) to celebrate the life of Martin Luther King Jr.

The three cosmonauts aboard the station — Mikhail Kornienko, Sergey Volkov and Yuri Malenchenko — have a full day of tasks scheduled.

Last year, and in 2014, NASA tweeted a photograph of King's hometown, Atlanta, as seen from the space station.

Kopra and Peake finished a spacewalk Friday — Peake's first — and repaired one of the space station's eight power channels before returning early because of a water bubble in Kopra's helmet.

The main upcoming task on their schedule, Huot said, is Kelly's test run for the SPHERES Zero Robotics Program, which let high school students write algorithms for three free-flying robotic satellites operated from the space station. The winning research designs are used to run the actual satellites in space.

Kopra, Peake and Malenchenko arrived at the space station in December to join Kelly and Kornienko, who are several weeks away from the end of their yearlong mission in space, as well as Volkov.