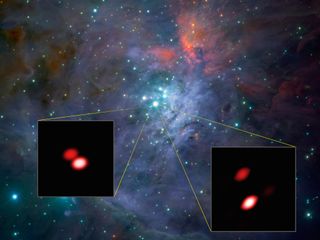 As part of the first observations with the new GRAVITY instrument the team looked closely at the bright, young stars known as the Trapezium Cluster, located in the heart of the Orion star-forming region.
(Image: © ESO/GRAVITY consortium/NASA/ESA/M. McCaughrean)

A new instrument designed to study the extreme environments around black holes has observed the heavens for the first time — and made a surprising discovery.

During the course of this test, Gravity — which combines the light gathered by multiple telescopes to form a virtual observatory up to 660 feet (200 meters) wide, using a method called interferometry — found that the star Theta Orionis F is actually two separate stars, the researchers said. They also created a video to zoom in on the double star revealed by Gravity.

"During its first light, and for the first time in the history of long baseline interferometry in optical astronomy, Gravity could make exposures of several minutes — more than a hundred times longer than [was] previously possible," Frank Eisenhauer, of the Max Planck Institute for Extraterrestrial Physics in Germany, said in a statement.

"Gravity will open optical interferometry to observations of much fainter objects, and push the sensitivity and accuracy of high angular resolution astronomy to new limits, far beyond what is currently possible," Eisenhauer added.Gravity's main task will involve studying what happens near supermassive black holes — those that lie at the hearts of other galaxies, as well as the one at the center of our own Milky Way. (Black holes exert a tremendous gravitational pull, which explains the instrument's name.)

Scientists will also use Gravity to probe exoplanets, image the surfaces of stars, and examine mass accretions and jets — phenomena that occur near newborn stars and supermassive black holes, the researchers said.

The Max Planck Institute for Extraterrestrial Physics leads the Gravity consortium, which includes six other partner organizations in France, Germany and Portugal.