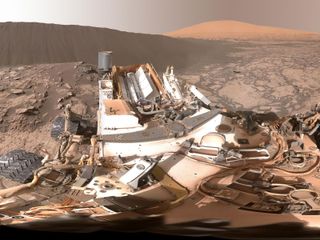 This Dec. 18, 2015, view of the downwind face of "Namib Dune" on Mars covers 360 degrees, including a portion of Mount Sharp on the horizon.
(Image: © NASA/JPL-Caltech/MSSS)

The new images depict the dark Bagnold Dunes, which Curiosity has been studying for about 6 weeks in history's first up-close investigation of extraterrestrial sand dunes.

"The mission's dune-investigation campaign is designed to increase understanding about how wind moves and sorts grains of sand, in an environment with less gravity and much less atmosphere than well-studied dune fields on Earth," NASA officials wrote Monday (Jan. 4) in a description of the new photos, which Curiosity took between Dec. 17 and Dec. 21.

"The Bagnold Dunes are active. Sequential images taken from orbit over the course of multiple years show that some of these dunes are migrating by as much as a yard, or meter, per Earth year," agency officials added.

The newly released photos depict the downwind side of Bagnold's Namib Dune, which rises at least 13 feet (4 meters) from the surrounding landscape, NASA officials said. The Bagnold field lies on the northwestern flank of the 3-mile-high (5 kilometers) Mount Sharp, whose upper reaches are visible in the distance in one of the photos.

The car-size Curiosity rover touched down inside Mars' 96-mile-wide (154 km) Gale Crater in August 2012, on a mission to determine if the Red Planet could ever have supported microbial life. The robot quickly found evidence of an ancient lake-and-stream system near its landing site, and Curiosity's subsequent observations have provided further information about this long-ago potentially habitable environment.

In July 2013, Curiosity set out for the foothills of Mount Sharp, which rises from Gale's center and has long been the rover's ultimate science destination. (Mission scientists want the six-wheeled robot to climb up through the mountain's lower reaches, reading a history of Mars' changing environmental conditions in the rock layers as it goes.)

Curiosity experienced a problem with its 7-foot-long (2.1 m) robotic arm last month that affected the rover's operations for a few days. But mission team members quickly addressed the issue, which was identified as a minor software glitch, and the arm was back to normal by Dec. 23, NASA officials said.