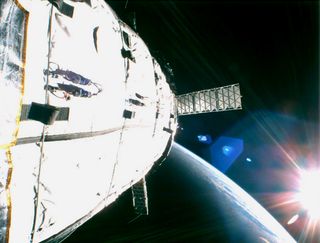 Thesuccess of Bigelow Aerospace's Genesis 1 module, which has been operating inorbit since July 12, has put the company well ahead in its plans for bigger andmore capable modules that eventually will host visitors in orbit.

"Froma technological standpoint, we are years ahead of where we thought we would beat this time...due to the success of Genesis 1," said Bigelow Aerospace CorporateCounsel, Mike Gold. "At this point, we feel we're ready to move ahead andtackle what will be the largest challenge to date for Bigelow Aerospace...todevelop a habitat that will actually be capable of supporting a crew."

The Genesis 1 is nearly 15-foot (4.4 meters) long. The modulefilled itself out to over 8 feet (2.54 meters) in diameter from itstightly-packed launch configuration of some 5 feet (1.6 meters) across. In itspressurized fully-expanded status, the structure yields 11.5 cubic meters ofusable volume. The module is energized by eight solar arrays--a set of four oneach end of the craft.

Nowbeing groomed for flight is Genesis 2. Its launch campaign will begin inJanuary, Gold told SPACE.com, with liftoff of the hardware slated forthe first quarter of next year. Barring launch delays, Genesis 2's flight couldcome on the early end of that quarter, he added.

BigelowAerospace also introduced with the Genesis 2 mission a "Fly Your Stuff"program. Orders are no longer being accepted so engineers can ready Genesis 2for takeoff.

TheFly Your Stuff participation program enables customers to send individual itemsinto Earth orbit onboard the Genesis 2 module. Once the craft is in space, theobjects inside the module are to be photographed by onboard cameras fordown-link to Earth--and a way to create a revenue stream too.

Thatcraft would offer 180 cubic meters of habitable space, fully-equipped with lifesupport systems, attitude control, on-orbit maneuverability, as well as reboostand de-orbit capability. This larger module--sporting a trio of windows--couldsupport a three-person crew and be on-orbit in a late 2009-2010 time frame,Bigelow reported.

Goldsaid that work is already underway in designing Sundancer. Genesis 2, in fact, willcarry technology that could be implemented in the Sundancer module.Furthermore, Sundancer is itself a progressive step toward the BA-330 orbitalhabitat. The "330" signifies the cubic meters of that module's internal volume.

Lessonslearned from the performance of both Genesis 2 and Sundancer is driving thedesign and schedule of future projects, such as the BA-330, Gold said.

BecauseSundancer is larger, heavier and more complex than Genesis-class modules, itmost likely is beyond the capabilities of a Dnepr booster.

Amedium launch vehicle would be required--say a Falcon 9 launcher from SpaceX, aUkrainian/Russian Zenit, or an Atlas booster, Gold said. But given a Sundancerbopping around the globe, or the larger BA-330, how to get people up toBigelow-supplied live-in modules is another matter.

Accordingto George Sowers, Atlas Business Development and Advanced Programs Director,Lockheed Martin is working with Bigelow Aerospace "to evaluate the market ofspace tourism and research to determine if Atlas could be a part of thispotential new market area."

TheAtlas has a celebrated past history. The booster hurled America's first astronautsinto orbit in the 1960s.

Apotential passenger capsule for Bigelow would likely be launched aboard theAtlas V 401 configuration. Demonstrating human-qualified system upgrades couldbe done by pre-testing those upgrades on commercial or government missionsprior to flying the first passengers.

Also,Bigelow and Lockheed Martin are probing the production and supply of Atlasrockets, as well as delving into flight safety and performance of the booster.Potential business models and business plans are on the table too.

Followingthis initial work, each company will assess the feasibility of going forwardwith a program to develop a human-qualified Atlas to match the expected demand.

Spaceoperations and programs at Bigelow Aerospace are on the upswing--so much so thatthe company is increasing its talent pool, on the lookout for expert engineers,technicians, managers as well as astronauts, Gold pointed out.

Projectsunderway at Bigelow Aerospace--along with activities at other privateorganizations like SpaceX and Scaled Composites, for example--should help offset,somewhat, worries about the graying of the aerospace workforce.

"Itgives people solid, hands-on experience. The lack of that has been part of theproblem in the past," Gold said. "We have ambitious plans and we're looking forgood people. We like to think that this is the biggest adventure in space."