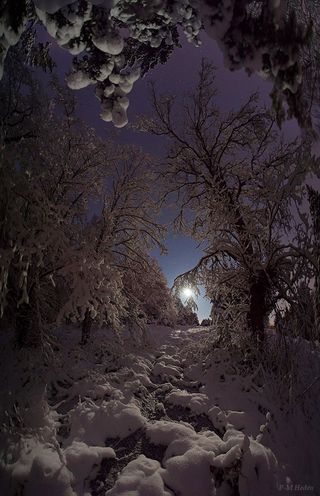 The December solstice signals the beginning of winter for the Northern Hemisphere. This image was taken near Stockholm, Sweden, by astrophotographer P-M Hedén of in December 2012.
(Image: © P-M Heden/clearskies.se)

The solstice gets its name from the apparent stop ("stice") in the motion of the sun ("sol"). The earliest astronomers recorded this phenomenon carefully: Monuments like Stonehenge are thought to have been used to mark the extreme positions of the sun in the sky. The December solstice has long marked the beginning of the new year, and it's mainly because of slippage in our calendar that it now occurs 11 days before the "official" start to the new year, Jan. 1.

The solstice is a day of celebration in many cultures. The Romans knew it as "Saturnalia," and the early Christians adopted the date of the solstice to mark the birth of Christ, so that they could celebrate without drawing the attention of their Roman masters.

Remember, these are all exactly the same time in the broader scheme of things; local times are just vagaries of the way we handle time around the world.

The graphic above shows the sky as it would appear at the time of solstice from a location where the solstice occurs at noon, which, this year, would be Vietnam. Through the Starry Night software, we have turned the blue sky transparent and have added the two coordinate systems we use to mark positions in the sky.

The red line across the sky marks the celestial equator, halfway between the celestial North and South poles. It shows 18h on the meridian because right ascension, the celestial equivalent of longitude, is measured from the vernal equinox, exactly 9 months ago.

The green line marks the ecliptic, the path that the sun appears to follow across the sky. When the solstice occurs, the sun is at its southernmost position, at a declination (celestial equivalent of latitude) of exactly 23 degrees and 26 minutes, which just happens to be the exact angle at which the Earth's poles are tilted from the ecliptic.

In the Southern Hemisphere, the situation is reversed. The December solstice marks the longest day in the year, combined with the shortest night. Longer days mean more hours of sunshine and warmer weather.

I tend to avoid using the words "winter" and "summer" when talking about the solstices because, even though the sun's position in the sky is responsible for our seasons, it does not match exactly with the seasons as we experience them. Sometimes, the astronomical solstices and equinoxes are referred to as "the first day of" a new season, but these days don't actually indicate when snow will start falling in December or when flowers will start blooming in March. Depending on location conditions, seasons arrive and depart in different ways, and vary in severity. Hence the old joke about the Canadian seasons: 11 months of winter and one month of bad sledding.

This article was provided to Space.com byS imulation Curriculum, the leader in space science curriculum solutions and the makers of Starry Night and SkySafari. Follow Starry Night on Twitter @StarryNightEdu. Follow us @Spacedotcom, Facebook and Google+. Original article on Space.com.