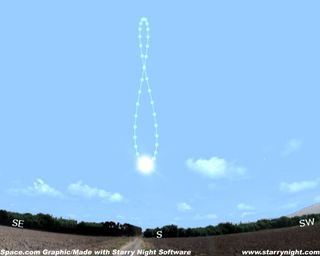 Figure A. The noontime position of the Sun in the sky, plotted over a year, produces a figure eight-shaped curve known as the analemma. Earth’s elliptical orbit produces the curve of the analemma. Its lowest and highest points are, respectively, the winter and summer solstices. The vertical line running through the analemma is the meridian. This view shows the Sun at noon on 4 January 2007, the day of perihelion – Earth’s closest approach to the Sun.

At first glance, it makes no sense. If Earth is closest to the Sun in January, shouldn't it be summer? Maybe, if you live in the Southern Hemisphere. So what does this mean?

Earth's orbit is not a perfect circle. It is elliptical, or slightly oval-shaped. This means there is one point in the orbit where Earth is closest to the Sun, and another where Earth is farthest from the Sun. The closest point occurs in early January, and the far point happens in early July (July 7, 2007). If this is the mechanism that causes seasons, it makes some sense for the Southern Hemisphere. But, as an explanation for the Northern Hemisphere, it fails miserably.

In fact, Earth's elliptical orbit has nothing to do with seasons. The reason for seasons was explained in last month's column, and it has to do with the tilt of Earth's axis. But our non-circular orbit does have an observable effect. It produces, in concert with our tilted axis, the analemma.

If you plot the noontime position of the Sun in the sky over a one-year period, it produces a figure-eight shape on the sky (Figure A). This is the analemma. You may have seen it drawn on a globe of Earth. The shape results from the combination of two things: the 23.5° tilt of Earth on its spin axis, and the elliptical shape of Earth's orbit around the Sun.

That's where our elliptical orbit comes in! Look at Figure A again. Notice the vertical line running up from the south point on the horizon? That's the meridian. The meridian runs straight up and over the sky, from due north to due south.

If Earth's orbit was a perfect circle, the Sun would cross the meridian at noon every day (ignoring daylight savings time). But our orbit is slightly oval-shaped. In July, we are at our furthest point from the Sun, and Earth moves slower than average along its path. In January, we are closer to the Sun, and Earth speeds up a bit in its orbital progress. The result of this change in speed means the Sun crosses the meridian a little early, or a little late, depending on where Earth is in its orbit. For all points along the curve to the left of the meridian, the Sun is "slow." It crosses the meridian after 12:00 p.m. For all points along the curve to the right of the meridian, the sun is "fast," crossing the meridian slightly before noon.

Astronomers call this the equation of time. It is marked on many sundials. The equation of time is defined as the difference between true solar time (determined by the Sun's position in the sky) and mean solar time (the time told by your watch). The two times can vary by as much as 16 minutes over the course of a year.

The difference between the two is 5,003,451 km, (3.3 percent), and not enough to cause the seasons. Even though, at this time of year, we're as close to the Sun as we can get, for the Northern Hemisphere, it will always be winter.