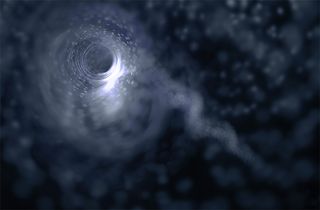 The technique, known as reverberation mapping, has been in astronomers’ toolkits for decades, but it required much labor and telescope time.

The idea is that radiation from swirling matter at the mouth of an active black hole will light up distant clouds. By chemically analyzing the gas in the so-called accretion disk around the black hole and comparing it with the glow of gas farther away, astronomers can figure out the mass of the black hole and the strength of its gravitational field.

"This technique takes advantage of the fact that accretion disks don't always shine at the same brightness," the University of Texas McDonald Observatory wrote on its Stardate.org website.

"A disk can flare brightly as new material falls in … or as magnetic fields cause some of the disk's gas to clump together. Measuring how long it takes the surrounding clouds to brighten as they are illuminated by these flares reveals their distance from the black hole. And measuring the width of the lines in the spectra from these clouds reveals how fast they are moving," the observatory said.

To test whether a robot observatory could compile the maps, astronomers conducted a pilot program at the Las Cumbres Observatory Global Telescope Network (LCOGT), which currently consists of 11 automated telescopes in Texas, Hawaii, Australia, South Africa and Chile.

"A spectrograph is a special kind of camera that splits the light of an object into its constituent colors, like a rainbow, and lets you do things like measure the chemical composition of an object and how fast it is moving with respect to you," astrophysicist David Sand, with Texas Tech University, wrote in an email to Discovery News.

Robotically taking pictures of the sky is pretty commonplace, he added, "but these spectrographs were – and still are – totally new."

(FLOYDS is named after the band Pink Floyd in honor of the iconic, light-splitting prism that graces the cover its "Dark Side of the Moon" record album.)

For about 200 days, the network’s robot imagers and the FLOYDS spectrograph in Hawaii kept tabs on Arp 151, a well-studied galaxy about 300 million light years away in the constellation Ursa Major, the Great Bear.

The robot astronomers proved capable, coming up with measurements that put Arp 151’s black hole mass at 6.2 million times the mass of the sun.

"It seems like the regions around the black hole had changed in the last few years, and that is very interesting," Sand said.

With a successful demonstration under its belt, the robot network is now turning its attention to a bigger survey of nearby and more distant galaxies with active black holes.

"We’re really going to try to push the technique into new regimes with our robotic capabilities," Sand said.