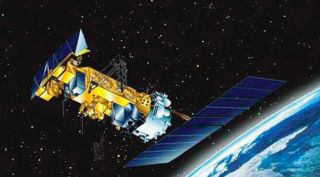 An illustration of the family of NOAA polar-orbiting weather satellites that includes NOAA 16, which suffered an apparent breakup Nov. 25.
(Image: © NOAA)

LONDON — A U.S. National Oceanic and Atmospheric Administration satellite retired in 2014 has suffered an apparent breakup, the second time in less than a year that a polar-orbiting weather satellite has generated orbital debris.

The Joint Space Operations Center (JSpOC) announced Nov. 25 that it had identified a possible breakup of the NOAA 16 satellite. The center, which tracks objects in orbit and warns of potential collisions, said it first detected the breakup at 3:41 a.m. Eastern time and was tracking an unspecified number of "associated objects" in the orbit of NOAA 16.

JSpOC said later Nov. 25 that the debris from NOAA 16 posed no current threat to other satellites in orbit. It added that it did not believe the debris resulted from a collision with another object, suggesting that NOAA 16 broke up on its own. [The Biggest Spacecraft to Fall from Space]

NOAA 16 launched in September 2000 with a planned lifetime of three to five years. The spacecraft continued to operate in a backup role until June 2014, when NOAA retired the spacecraft after an unspecified "critical anomaly."

The breakup, if confirmed, would be the second time in less than a year for a satellite in polar orbit. In February, the Defense Meteorological Satellite Program Flight 13 satellite exploded in orbit, creating several dozen pieces of debris. A sudden temperature spike in that spacecraft led spacecraft engineers to conclude a battery in the spacecraft ruptured because of a design flaw. Seven other DMSP spacecraft have a similar design flaw.

NOAA 16, like the final series of DMSP satellites, was built by Lockheed Martin Space Systems in the 1990s and used the same trouble-prone battery charge assembly implicated in the DMSP 13 explosion. The Air Force's DMSP 13 failure report, released in July, noted that the battery design was blamed for the 1993 loss of NOAA 13, which shut down "due to a full battery discharge."

Orbital debris mitigation guidelines developed by the U.S. government recommend removing all sources of on-board energy on a spacecraft, including venting propellant tanks and discharging batteries, when a spacecraft reaches the end of its mission. It’s not clear if spacecraft controllers were able to carry out those procedures when the NOAA 16 spacecraft encountered its mission-ending anomaly last year.

NOAA 16 was part of the Advanced TIROS-N series of polar-orbiting weather satellites, the last of which — NOAA 19 — was launched in 2009 after being repaired following a factory mishap.

NOAA still has seven TIROS-N series satellites in orbit, but only three of those are still operational.