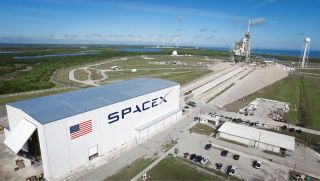 SpaceX is modifying Launch Pad 39A at NASA's Kennedy Space Center in Florida to adapt it to the needs of the company's Falcon 9 and Falcon Heavy rockets, which are slated to lift off from the historic pad in the near future.
(Image: © SpaceX)

It's official: SpaceX will fly NASA astronauts to the International Space Station a few years from now.

The milestone marks the second of four guaranteed orders the space agency will make under its CCtCap deals with SpaceX and Boeing, which received its first order this past May. [Photos: Meet SpaceX's Crewed Dragon for Astronaut Trips]

"It's really exciting to see SpaceX and Boeing with hardware in flow for their first crew rotation missions," Kathy Lueders, manager of NASA's Commercial Crew Program, said in a statement. "It is important to have at least two healthy and robust capabilities from U.S. companies to deliver crew and critical scientific experiments from American soil to the space station throughout its life span."

In September 2014, NASA awarded Boeing and SpaceX $4.2 billion and $2.6 billion, respectively, to finish work on their astronaut taxi systems. Boeing is developing a capsule called the CST-100 Starliner, while SpaceX is working on a crewed version of its Dragon cargo capsule, which has already visited the orbiting lab six times on robotic resupply runs under a separate NASA contract.

NASA wants both Boeing and SpaceX to be ready to fly astronauts by late 2017. The agency has not yet decided which company will fly the first private crewed mission to the orbiting lab.

The United States has been unable to launch its own astronauts since the space shuttle fleet retired in July 2011; the nation has been buying seats aboard Russia's Soyuz spacecraft, which cost more than $70 million apiece per flight.

Shifting over to private American spacecraft should reduce such costs and also boost the scientific output of the orbiting lab, because the CST-100 Starliner and Dragon will be able to carry more passengers than the three-person Soyuz, NASA officials said. Each of the American capsules can seat up to seven astronauts, though a standard mission to the space station will carry up to four crewmembers and about 220 lbs. (100 kilograms) of pressurized cargo.

"Commercial crew launches are really important for helping us meet the demand for research on the space station because it allows us to increase the crew to seven," Julie Robinson, International Space Station chief scientist, said in the same statement. (To date, a full crew aboard the orbiting lab has consisted of six people.)

"Over the long term, it also sets the foundation for scientific access to future commercial research platforms in low Earth orbit," Robinson added.