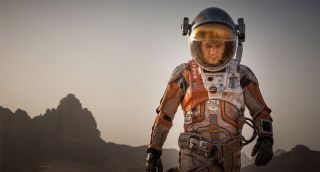 If you loved the movie "The Martian," here's your chance to show it.

"The Martian," which stars Matt Damon as a NASA astronaut stranded and presumed dead on the Red Planet, is up for Raw Science's 2015 Kip Thorne Gravity Award for the best depiction of a scientific principle in film. (The award is named for renowned physicist Kip Thorne, who won the initial one last year for the representation of gravity in the sci-fi epic "Interstellar.")

"The Martian" is up for its treatment of botany, and it faces two competitors: "Inside Out" (for its depiction of psychology) and "Ex Machina" (artificial intelligence). You can vote for your favorite at Raw Science's website here: http://www.rawscience.tv/raw-science-film-festival-2015-who-should-win-the-kip-thorne-gravity-award/

Raw Science will also host its second annual film festival early next month, to celebrate the best of science-oriented movies of 2015. The festival, which features fiction and non-fiction films created by a wide range of auteurs from students to Hollywood veterans, will take place Dec. 4 and Dec. 5 at the USC Institute of Creative Technologies in Playa Vista, California.