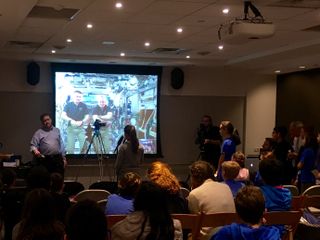 Students from East Side Middle School in New York City gathered to talk with astronauts Scott Kelly and Kjell Lindgren aboard the International Space Station during a special event Nov. 19.
(Image: © Sarah Lewin/Space.com)

NEW YORK — Astronauts aboard the International Space Station fielded rapid-fire questions from curious middle schoolers this morning (Nov. 19), delving into life on the orbiting lab and the everyday strangeness that invites.

Sixty-five students from East Side Middle School in New York City, chosen for its science, technology, engineering and math focus, got the chance to talk with NASA astronauts Scott Kelly and Kjell Lindgren aboard the station as part of an event hosted in the Time-Life building by the publication Time for Kids. The students also talked with Matt Pearce, an education program specialist from the NASA Goddard Institute for Space Studies in New York, as well as Time magazine science editor Jeff Kluger and multimedia editor Jonathan Woods, who is developing a series of videos documenting Kelly's yearlong mission to the space station called "A Year in Space."

"This is [Time for Kids'] 20th anniversary, so we think this is a fantastic way to celebrate 20 years of bringing the world to kids — and now, bringing 'outside the world' to kids," Nellie Gonzalez Cutler, Time for Kids' editor in chief, told Space.com. [One Year in Space: Epic Space Station Mission in Photos]

Along with the question-and-answer sessions, the students passed around samples of space station food and a diaper like those worn on spacewalks, and one kid got to try on an astronaut sleeping bag. The students peppered all of the speakers with questions about the space station's construction, how the space program works in general and climate change's effects on Earth, but most of their questions to the astronauts focused on the daily experience of living on the space station.

Lindgren, about to enter his fourth month in space, discussed the most surprising things about life in space: "When you think about living in space, and getting to float and see Earth, it seems like that's something that just would be constantly new and exciting," he said. "It's actually one of the amazing things that you kind of get used to that — you get used to being able to float around. It just kind of becomes normal up here." (Kelly and Lindgren illustrated this sentiment by slowly flipping in opposite directions for the camera.)

Kelly, a veteran of multiple previous trips to space, also described his recovery process upon reaching the ground: he felt dizzy for around a day, and felt tired out and sore for a while after. "Your neck is really sore because up here you really don't have to hold your head up; it's just kind of floating on your shoulders," he said. Kelly is more than two-thirds of the way through his yearlong mission, and his recovery may take longer this time around — but that's all part of learning how humans react to space to prepare for longer missions, such as the trek to Mars.

Kelly and Lindgren touched on chores, sleeping and recreational time on the space station, as well as owning up to their favorite foods — granola for Kelly, and dehydrated strawberries for Lindgren. And they admitted that they hadn't memorized what most of the buttons do — there are a lot up there, after all — but had a good grasp on the ones they use every day.

Lindgren described the most amazing thing he'd seen. While normally the astronauts can see the northern and southern lights along the edges of Earth's atmosphere, sometimes brilliant auroras wind up right below them.

"There have been a couple times that it has just lit up the atmosphere below us, so that we're essentially flying through it," Lindgren said. "Ripples of green and purple below us, wiggling very quickly like a snake — absolutely beautiful, and gives you goose bumps."

Their views of Earth aren't always rosy, however: Kelly described being able to see pollution obscuring cities on the surface and the very thin, fragile line of the Earth's atmosphere.

The duo also answered an important question for prospective astronauts: Since urine is recycled, how weird does it feel to drink water aboard the station?

"I think part of it is, we try not to think about it too much," Lindgren said. "Up here, frankly, the water tastes great." The system combines recycled water and water condensed out of the air, he added, and such technology will be essential as space travelers explore further and need to reclaim resources instead of bringing everything along with them.

"To add to Kjell's answer: It's weird to drink your own urine," Kelly cut in, "but what is weirder is to drink other people's urine."