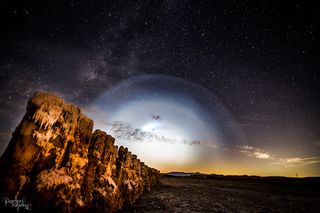 Photographer Porter Tinsley captured this stunning photo of Trident missile test by the U.S. Navy on Nov. 7, 2015 as seen from the shore of the Salton Sea in Southern California.
(Image: © Porter Tinsley)

Pulsars, dwarf planets and alien worlds break records, a strange space object falls from the sky and Pluto's moons get weird — this is Space.com's top stories of the week.

Bright, unexpected lights lit up the California sky Saturday evening, alarming nighttime photographers and skywatchers; a Navy statement after the test (and a less-noticeable second test Monday afternoon) revealed the lights to be missile test launches. Such tests are not announced ahead of time so U.S. adversaries can't observe them carefully. [Full story: Strategic Command Issues Statement on Trident Missile Test that Freaked Out the West Coast]

A newly-discovered dwarf planet, two to three times further away from Pluto and less than half its size, may be the most distant in our solar system. Researchers do not yet know whether it moves closer in to the sun over the course of its orbit, though, keeping it from the official champion title. [Full story: New Dwarf Planet In Our Solar System May Be The Farthest One Yet]

Two mountain peaks on the edge of Pluto's icy plains, nearly 4 miles (6 kilometers) high and hundreds of miles across, appear to be volcanoes — in fact, researchers said volcanoes are the "least weird hypothesis" for the massive icy structures. [Full story: Icy Volcanoes May Erupt on Pluto]

A rocky, 1.2-times Earth-sized planet orbiting a dim star is the closest found yet, and it appears to be a planet with atmosphere: Venus-like atmosphere, to be specific. Its nearby location promises a rich opportunity for observations of an alien planet. [Full story: Closest Earth-size Alien Planet Found, May Be a Venus Twin]

Construction has now started for the Giant Magellan Telescope in Chile, which will be the largest in the world — with an enormous light-collecting area 82 feet (25 meters) across and promising views 10 times sharper than the Hubble Space Telescope. The ambitious project was celebrated at a star-studded groundbreaking ceremony.[Full story: Construction of Giant Next-Generation Telescope Begins in Chile]

Orbiting space junk burned up in Earth's atmosphere off the coast of Sri Lanka, and scientists were ready in a tricked-out business jet to take measurements and learn as much as possible about its re-entry. The object was likely long-forgotten debris from an old rocket mission taking the long way home. [Full story: 'WTF' Space Junk Meets Fiery Demise as Scientists Watch (Video)]

A new team presented a rapid transit system for robotic spacecraft propelled by the charged particles that flow outwards from the sun at the 100-Year Starship Symposium Oct. 30. The system has received two rounds of funding from the NASA Innovative Advanced Concepts program. [Full story: 'Electric Sails' Could Propel Superfast Spacecraft by 2025]