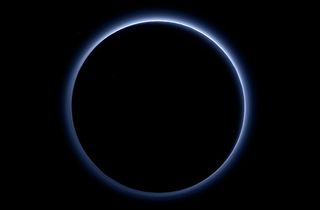 Back-lit, blue-skied Pluto is still a planet in the heart, though not in official registers.
(Image: © NASA/New Horizons Team)

Nine years ago, the International Astronomical Union established new criteria for determining what classifies as a "planet," a controversial move that officially (but not in spirit) stripped Pluto's status as the solar system's ninth planet. Left undecided was what to do about all the so-called planets being discovered outside the solar system, a number that now approaches 5,000.

On Tuesday, astronomer Jean-Luc Margot, with the University of California Los Angeles, unveiled what he describes as a simple "planet test."

It's this last criteria that kicked Pluto out of the planet club and into a new category of "dwarf planets," a classification Pluto currently shares with Ceres, located in the Main Asteroid Belt, and Pluto's Kuiper Belt cousins Eris, Haumea and Makemake.

The ability of a planet to dominate its region of space also is the criteria that Margot focused on in devising a classification system for planets beyond the solar system.

His test can "determine whether a body can clear a specific region around its orbit within a specific time scale, such as the lifetime of its host star. The test is easy to implement and allows immediate classification of 99 percent of all known exoplanets," UCLA said in a press release.

The proposed criterion requires only estimates of the star mass, planet mass, and orbital period, all of which can be easily obtained with Earth-based or space-based telescopes, UCLA noted.

"The disparity between planets and non-planets is striking," Margot said in a statement. "The sharp distinction suggests that there is a fundamental difference in how these bodies formed, and the mere act of classifying them reveals something profound about nature."

"I think that there's pretty clear appreciation among planetary scientists that Pluto is much more similar to the planets of our solar system than anything else," Stern said. "Astronomers don't seem to understand that attributes matter."