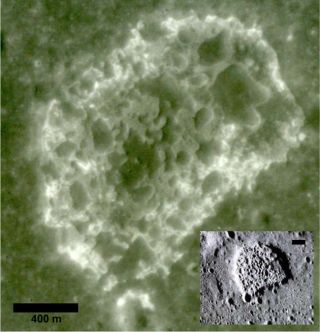 Close-up view of a strange depression on the Moon The sharp details of features on the interior indicate recent formation but not by an impact.
(Image: © Peter H. Schultz, Brown University.)

The Moon has been seen huffing and puffing, remnants of a once very active satellite, scientists reported today.

It's believed that the Moon hasn't experienced any volcanic activity for at least three billion years, but a new look at some old evidence suggests otherwise.

Examining photographs and data from the Apollo missions, scientists noticed that volcanic gas has been released from the lunar surface within the last 1 million to 10 million years.

The researchers focused on a D-shaped area first noticed by the Apollo astronauts, called the Ina Structure.

"It stuck out like a sore thumb, like a heel print," said lead study author, Peter Schulz of Brown University.

The surface expressions on Ina were very fresh with sharp edges, hinting to the fact that they were only recently exposed.

"Something that razor sharp shouldn't stay around long," Schulz said.  "It ought to be destroyed within 50 million years."

Space debris slams into the Moon continuously and degrades the surface and even changes the reflectivity of the lunar dirt, called regolith. This allows scientists to measure how young or old the material is.

This stuff is very, very young, Schulz told SPACE.com.  And it can't be from collapse or because of a fault but because the regolith was removed from these small patches.

The researchers suspect gases are finding their way from deep within the interior at a central portion of the Moon that is still cooling. As the temperature of deep interior decreases and faults and fractures occur, small amounts of gas are released.

These gases eventually get together and find their way up to the weakest possible place which tends to be right along old fractures.

"All of us had acknowledged that the Moon is dead volcanically but it doesn't mean that it can't occasionally burp and these burps may be coming from a buildup deep within the throat of the moon, Schulz said.

Scientists aren't sure whether the gases are cold or hot and believe that Ina and similar sites need to be further explored.

The new finding, detailed in the Nov. 9 issue of the journal Nature, means that the Moon should be monitored more closely, Schulz said. "This is an example in a way of why the old photographs and data we recovered from Apollo are important-the data may be old but the insights might be new."