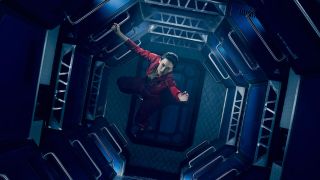 Characters from very different worlds find themselves bound together by this woman's disappearance in the new SyFy Channel Show "The Expanse," which premieres Dec. 14.
(Image: © SyFy)

At New York Comic Con on Oct. 8, we got a glimpse of how the show's cast and writers pulled together the show's intricate set of worlds. Introducing the Comic Con panel, the moderator asked the creators whether "The Expanse" would have a sort of "Game of Thrones"-in-space vibe to it because of the many plotlines and political elements — they gleefully said they welcomed that particular comparison.

And it shows. Comic Con attendees got a sneak peek at the pilot episode of the show, and Space.com even got a chance to talk with the creators and some of the cast members, and we can already tell it will cast a wide and ambitious net in portraying a future where humans have spread to the stars. [10 Space Movies to Watch in 2015]

At first, the plot is divided among a futuristic New York City, an ice-hauling spaceship and a mining colony on the dwarf planet Ceres, where a sort of underclass lives in lowered gravity and is potentially inciting rebellion. One main character, Detective Miller, ventures into that underworld to locate a mysterious missing woman (whose fate, going by the trailers, will have a major job in tying together all the different plots and the giant ensemble cast).

Each of the unique worlds portrayed on the show is shown in incredible texture and detail. This is especially the case for the dwarf planet Ceres. The asteroid spins, creating artificial gravity that is spread unevenly from surface to core — and the pull points outward, so people walking on the inside of the surface feel it very differently than those near the core. People who were born or grew up in lowered gravity begin to look physically different: They are taller, and their bodies can't stand up to Earth's stronger pull.

Mark Fergus, a writer and executive producer on the show, described this phenomenon in depth as an example of the ways the show's creators work to turn the complicated universe portrayed in  James S. A. Corey's novel series, on which the show is based, into TV form.

"To live near the core, gravity sucks — it's really hard to live down there," Fergus said at a roundtable discussion before the Comic Con panel. "[In] each level, you get to see how this world functions economically, socially — you can tell how crappy a neighborhood you live in if you pour a belt of whiskey … how far it tilts in the glass will tell you."

It will be interesting to see if that level of detail can be sustained across such a broad set of characters, and if the story spread across 10 episodes will be as satisfying as reading an intricate, multifaceted novel. (In fact, the creators said they're working in elements from the novel series, as well as from some of Corey's novellas set in the same universe.)

Regardless of whether the show succeeds, the spaceships, cities and open sky will look awesome. Plus, people live on Mars and Jupiter! And the message they're pursuing is an interesting one.

"The stories think about what happens when we bring our humanness out into the solar system, which is going to happen if we survive long enough to get off the planet," Thomas Jane, who plays Detective Miller on the show, said at the roundtable.

The problem is, he said, humans are already messing up the planet with the choices we're making. "So this story deals with what happens if we bring all the choices, and all our humanness, out into the solar system," he added.