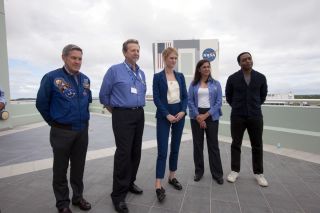 CAPE CANAVERAL, Fla. ─ More than 10,000 students from across the country recently participated in a digital learning network at Kennedy Space Center with NASA scientists, astronauts and cast members from the new film "The Martian."

Actors Chiwetel Ejiofor and Mackenzie Davis of "The Martian" took part in panel discussions on Oct. 1 alongside Robert Cabana, the Kennedy Space Center director and a retired astronaut; Nicole Stott, a former astronaut who spent time aboard the International Space Station; Jim Green, NASA's director of Planetary Sciences; and other NASA scientists. The scientists, astronauts and actors answered questions from the students about NASA's goal of a "journey to Mars" and about the new film.

Mars is making headlines right now following the announcement of liquid salty water on its surface. The sci-fi thriller, directed by Ridley Scott, opened in theaters Oct. 2 and is a huge box-office hit. NASA is hoping the film will bolster support for its real-life journey to Mars.

The agency's lofty goal of sending a crewed mission to the Red Planet in the late 2030s relies heavily upon congressional funding. With an already flat budget, the agency is taking advantage of the blockbuster film to gain public support, which will hopefully lead to continual and maybe even increased funding. [Watch: Learning from "The Martian": Movies as Teaching Tools]

"Movies are great," Cabana, a veteran of four shuttle missions, told the middle- and high school students, many of whom were viewing the event remotely. "They stimulate your imagination and spark public interest. If you think back, most of what once was science fiction is now science fact. The tech in this film is not only plausible, but actual technology we are working on today."

NASA is also using the film as an opportunity to educate the public on why the agency wants to go to Mars, and to explain what is real science and what is fiction in the film. Green told the students, "We as humans have the explorer gene."

He went on to stress that the journey to Mars is more than curiosity; it's a way to ensure the survival of the human race.

"We want to have a backup plan. Look at the dinosaurs: They did not have a space program and look what happened," Green said jokingly.

Green explained to the students, "NASA's approach to human spaceflight is not exactly like 'Star Trek'; it's not 'Go where no man has gone before.' We have 50 years of exploring the Red Planet. There are spacecraft in orbit around Mars and our rovers are up there right now exploring, and collecting data to use for future missions."

Davis and Ejiofor told the students how working on "The Martian" gave them an incredible opportunity to learn about the space program and the real work taking place at NASA to prepare for the journey to Mars.

Davis plays Mindy Park in the film, a NASA satellite communications engineer who discovers that astronaut Mark Watney (Matt Damon) is still alive after being stranded when his astronaut team leaves Mars without him during a violent dust storm.

For her role, Davis said she absorbed hundreds of Mars images, and when asked about her visit to the Kennedy Space Center, she said, "It's really overwhelming to be here. Earlier before the panel, someone showed us pictures taken of Mars just five hours ago. The dates on images were sort of nebulous before, but now they really have an impact. It's all very overwhelming and emotional."

Ejiofor plays mission director Dr. Vincent Kapoor in the film. When asked about his thoughts on the movie, Ejiofor said, "This was a great project, and it's an amazing merging of fact and fiction. I was really excited about the ideas in the movie and actually going to Mars. Because there was so much research and detail, everything had this feel of being deeply realistic."

Following the discussion, the actors, along with Cabana, Stott and Green, visited the newly opened Pad 39C, and posed for a photo with Pad 39B — the site from which humans will launch to Mars — as a backdrop.