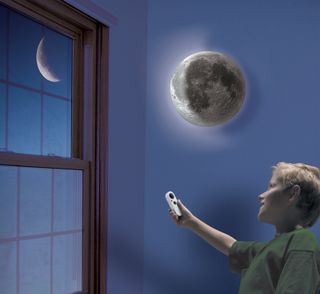 As a parent, I know that the dazzling sight of the moon in night sky can be a source of wonder for young kids, so it was no surprise when Uncle Milton's new "Super Moon in My Room" enthralled my 6-year-old the minute she laid eyes on it.

"Super Moon in My Room," which retails for $54.99, is the latest in a series of space-themed light-up wall lamps from Uncle Milton that pull double duty as a nightlight and educational tool for moon-minded kids. Uncle Milton launched the new moon light this month, which is impeccable timing given the supermoon total lunar eclipse on Sunday (Sept. 27).

Like its predecessor, "Moon in My Room," it's is a wall-mounted lamp shaped like the moon designed to mimic the 12 phases of Earth's real moon at the touch of a remote control. But what sets it apart from the older model is its size. At just about 15 inches (38.1 cm) across, it's about 30-percent larger than the original "Moon In My Room." And its by far coolest function allows you to sync "Super Moon In My Room" up to the phase of real-life moon via a built-in lunar clock.

The fact that "Super Moon In My Room" is larger than its predecessor is a cool nod to nature, in which a full moon at perigee (the point in moon's orbit when it is closest to Earth) can appear up to 14 percent larger than the smallest full moon. The new model also comes with an ethereal "solar eclipse" function that backlights the darkened moon with orange light to mimic a solar eclipse.

With four buttons on its remote control, "Super Moon In My Room" was simple for my daughter, a first-grader, to pick up in a few minutes. One of two smaller buttons toggles the lamp on and off, while the other activates the solar eclipse. Pressing and holding a larger main button (used to sync the lamp up with the real moon's phase) activates a playback of Apollo 11 astronaut Neil Armstrong's historic words: "Houston, Tranquility Base here, the Eagle has landed." It also has Armstrong's "That's one small step for man, one giant leap for mankind." Another button can play soothing nighttime sounds like crickets and such to lull a youngster to sleep. After a set time on, the lamp turns itself off to save battery.

For kids who are sticklers for accuracy, the back of "Super Moon in My Room" clearly labels the moon's northern and southern hemispheres, so you'll know which end is up when mounting it to the wall. As with the original "Moon In My Room," the latest version also comes with an access code to download an audio tour of the moon for kids to learn more about Earth's nearest neighbor.

In terms of range, Super Moon can handle most kids' bedrooms. I was able to control it with the remote from the far corner of my daughter's room (a distance of 12 feet, 6 inches according to my measuring tape) without any issues. At times, I did have to mash the buttons down firmly, but the Super Moon still activated as designed. My daughter had no problem controlling it from her bed, either.

"Supermoon in My Room" does not come with its own batteries. You'll need three C batteries for the moon lamp itself and two AAAs for the remote control. So that's something to consider if you plan to give it as a gift,  and I think it does make an excellent gift.

All told, "Supermoon In My Room" is a great option for parents looking for a comforting nightlight that also might inspire youngsters to gaze up at the moon. And it adds to Uncle Milton's family of planetary lamps, which includes "Mars In My Room" and "Earth In My Room," as well as the ceiling mounted "Solar System In My Room."

BUY "Super Moon In My Room by Uncle Milton >>