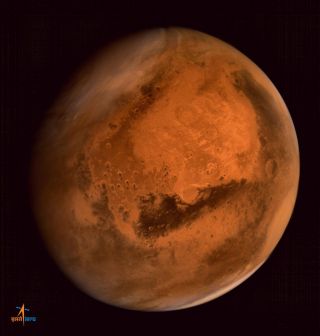 This image of Mars was captured by India's Mangalyaan orbiter, which arrived at the Red Planet in September 2014.
(Image: © Indian Space Research Organisation)

India's first-ever Mars probe is now one year into its historic mission, and it's still going strong.

Mangalyaan, which means "Mars craft" in Sanskrit, was the first interplanetary probe ever launched by India, and its $73 million mission is primarily a technology demonstration, officials with the Indian Space Research Organisation (ISRO) have said. [See the amazing Mars photos by India's Mangalyaan probe]

But Mangalyaan carries a color camera and four scientific instruments, which it has been using to study the Martian surface and atmosphere over the past 12 months.

To celebrate the anniversary, ISRO has compiled some of MOM's best images and most interesting scientific results in a 120-page "Mars Atlas," which you can download free of charge here:
http://www.isro.gov.in/pslv-c25-mars-orbiter-mission/celebrating-one-year-of-mars-orbiter-mission-orbit-release-of-mars

MOM's mission was originally scheduled to last 6 months, but operations were extended by an additional 6 months earlier this year. Further extensions are likely; ISRO officials have said that Mangalyaan has enough fuel onboard to keep studying Mars for years to come.

MOM might even last long enough to welcome a sister craft to Mars orbit. ISRO officials announced last year that the country plans to launch a Mangalyaan 2 mission in the 2018-2020 time frame.

MOM and MAVEN, which seeks to determine how fast Mars' atmosphere is being lost to space, are not the only operational spacecraft orbiting the Red Planet. NASA's Mars Odyssey and Mars Reconnaissance Orbiter are also eyeing the planet from above, as is the European Space Agency's Mars Express probe. (These latter three spacecraft arrived at Mars in 2001, 2006 and 2003, respectively.)

Two NASA rovers are also actively exploring the Martian surface — Opportunity, which landed in January 2004, and Curiosity, which survived a dramatic and unprecedented "sky crane" touchdown in August 2012.