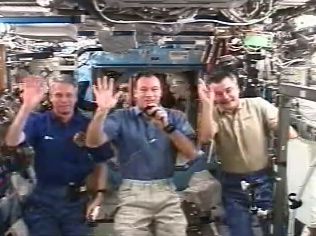 "Afterrunning without a hitch...the Elektron was deliberately shut off by Russianflight controllers to get additional data on valve and electrical continuitybehavior," Madison said, adding that the device--the primary oxygen generatoraboard the ISS--is slated for reactivation later today.

But thegenerator failedin mid-September just after NASA's STS-115 shuttle astronauts undockedfrom the ISS following their successful constructionmission. Overheating and a leak ofmildly toxic potassium hydroxide used in the Elektron prompted the failure, aswell as a briefemergency for the space station's then-Expedition13 crew.

At no timewere the Expedition 13 astronauts or the current Expedition 14 crew, commandedby veteran spaceflyer MichaelLopez-Alegria with Tyurin and European Space Agency astronaut ThomasReiter, in danger of running out of air, NASA officials said.

The spacestation astronauts relied on oxygen-producing candles and other supplies storedin tanks to maintain their atmosphere.

Thegenerator is a key piece of hardware, especially during periods of increasedactivity aboard the ISS such as joint operations during station crew changesand shuttle missions to complete the orbital laboratory. NASA's next ISS-boundshuttle flight, STS-116aboard Discovery, is slated to launch towards the space station on Dec. 7.

To performthe Elektron repair, Tyurin replaced a series of valves and cables using spareparts that arrived last week aboard the unmanned Russiancargo ship Progress 23. That cargo ship [image]had some initial docking difficulties during its Oct. 26arrival due to an errant navigation antenna that appeared to not haveretracted properly during the orbital rendezvous.

On Monday,NASA officials said that after further study Russian flight controllers concludedthat the antenna in fact did not retract properly, but did not prevent thespacecraft's docking or hatch opening and will likely not impact its stay atthe ISS.

Tyurin andLopez-Alegria arrivedat the ISS on Sept. 20 with U.S.space tourist Anousheh Ansari, who later returnedto Earth with Expedition 13 commander PavelVinogradov and flight engineer JeffreyWilliams. Reiter has served aboard the ISS since July and is scheduled toreturn to Earth in December with NASA's STS-116shuttle crew.