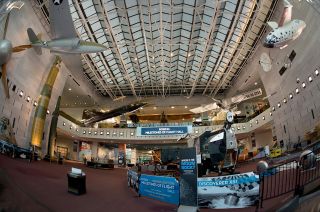 The ascent and descent stages to an Apollo Lunar Module (LM-2) have landed in the National Air and Space Museum's Boeing Milestones of Flight gallery to debut on display in 2016.
(Image: © Smithsonian)

The Eagle has landed, again.

An Apollo Lunar Module, the vehicle that ferried astronauts to and from the surface of the moon, was moved into the National Air and Space Museum's "Boeing Milestones of Flight" Hall this week in preparation for its conservation, modification and display debuting with the hall's re-opening in July 2016.

"The Lunar Module [LM] will act as a striking welcome to visitors as they enter the museum and [will] represent the 'milestone' of America's first moon landing in July 1969," Smithsonian officials said in a statement. [Apollo 11's Scariest Moments: Perils of the 1st Manned Moon]

The museum's moon lander isn't a replica. The second of the lunar modules to be built, LM-2 was intended for an uncrewed test flight into Earth orbit in 1968. The first test flight, Apollo 5 with LM-1, was so successful though, that LM-2's flight was deemed unnecessary. No longer needed by NASA, the LM-2 was transferred to the Smithsonian two years later.

In addition to a careful cleaning, details will be added to the artifact's exterior to create a near-exact representation of LM-5, the lander flown by Apollo 11 astronauts Neil Armstrong and Buzz Aldrin. Because none of the lunar modules were designed to return to the Earth, all of the examples of the craft that are on display in museums are test vehicles or replicas.

For almost 40 years, since the opening of the National Air and Space Museum in Washington, D.C. on July 1, 1976, LM-2 was exhibited on the east end of the building. It will now be the centerpiece of the renovated Milestones of Flight Hall, which is the museum's central and largest space.

The Apollo Lunar Modules (LM) were two-stage vehicles designed to ferry two astronauts from the moon's orbit to the lunar surface and back. The upper ascent stage included a crew compartment, equipment areas and a rocket engine. The lower descent stage consisted of landing gear, a descent rocket engine and lunar surface experiments.

The sheer size of the module — when stacked, the stages stand 23 feet tall and 14 feet wide (7 by 4.3 m) — made the LM-2 complicated to move, so its relocation to the Milestones Hall was accomplished in two phases. Last week, the ascent stage was transferred to the new space. The descent stage followed on Tuesday morning (Sept. 15).

"Conservation of the lunar module will begin immediately and will likely be completed by the end of October, though construction barriers will be put in place in late September, obstructing its view until early 2016," officials said.

The real Eagle (LM-5) remains on the moon. Its descent stage is still at Tranquility Base where it landed in July 1969. The ascent stage, which is what the astronauts used to return to orbit after their historic moonwalk, was jettisoned before they returned to Earth and later, under the pull of gravity, impacted the moon's surface.

LM-2's further transformation to represent Eagle will serve to keep the Apollo 11 mission front and center in the National Air and Space Museum after the relocation of the mission's other spacecraft that carried the crew home.

"The Apollo 11 Command Module, Columbia, which has been in the Milestones gallery since opening, will move to the Steven F. Udvar-Hazy Center, in Chantilly, Virginia, for conservation later this year," stated museum officials. "[It] will eventually be displayed in 'Destination Moon,' another museum gallery scheduled to open in 2020."

For about the next two weeks, visitors to the National Air and Space Museum will have the rare chance to see both LM-2 and Columbia, together, in the same space for the first and only time.

The renovation of the Boeing Milestones of Flight Hall is set to be completed in time to celebrate the museum's 40th anniversary, giving the main hall a 21st century look, featuring themes and displays suited to today's visitors. In addition to LM-2, the new Milestones' exhibits will include John Glenn's "Friendship 7" Mercury capsule, the Gemini 4 space capsule, the privately-constructed SpaceShipOne and the original filming model of the Starship Enterprise.

See more photographs of the Apollo lunar module's move into the National Air and Space Museum's Boeing Milestones of Flight gallery at collectSPACE.com.