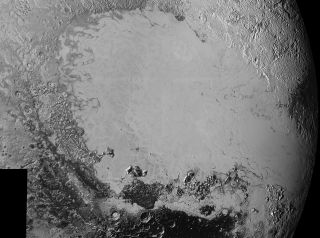 A giant slab of ice as big as California and Texas combined lurks just beneath the surface of Mars between its equator and north pole, researchers say. [Full Story: Gigantic Ice Slab Found on Mars Just Below the Planet's Surface]

Elon Musk appeared on "The Late Show with Stephen Colbert" Wednesday night (Sept. 9) to talk about dropping nuclear bombs on Mars, the future of rocket travel and a creepy, snakelike robot for electric-car owners. [Full Story: Stephen Colbert Says Elon Musk Is Either a Supervillain or a Superhero]

NASA's upcoming mission to Europa will primarily be a flyby affair, but it may also include a small lander that touches down on the potentially life-harboring Jupiter moon. [Full Story: NASA's Europa Mission May Land on Ocean-Harboring Moon]

Is this how we'll get samples back from Mars?

A mission that uses SpaceX's Dragon capsule to help bring chunks of Mars rock back to Earth for analysis could launch as early as 2022, scientists say. [Full Story: 'Red Dragon' Mars Sample-Return Mission Could Launch by 2022]

When an image of the extrasolar system HL Tau was unveiled last year, it sparked controversy over whether or not grooves in the disk of dust surrounding the star could be explained by the presence of newly formed giant planets. Now, a new paper suggests that the orbit of those planets could serve to stabilize rather than eject one another, as had originally been suggested. That means this image is the first time scientists have observed a forming planetary system, and a tightly packed one at that. [Full Story: First Image of Planet Birth Shows Tightly Packed Worlds]

A look inside SpaceX's astronaut taxi

SpaceX has thrown open the hatch to its Crew Dragon spacecraft, revealing a sleek black and white interior for the capsule it is building to fly astronauts to the International Space Station and other destinations. [Full Story: Step Inside Crew Dragon: SpaceX Reveals Interior of Crewed Space Capsule]