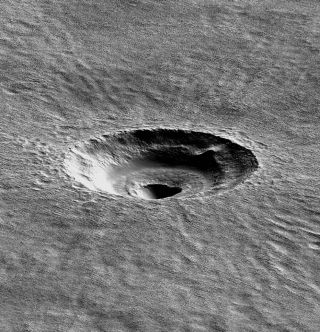 A giant slab of ice as big as California and Texas combined lurks just beneath the surface of Mars between its equator and north pole, researchers say.

This ice may be the result of snowfall tens of millions of years ago on Mars, scientists added.

Mars is now dry and cold, but lots of evidence suggests that rivers, lakes and seas once covered the planet. Scientists have discovered life virtually wherever there is liquid water on Earth, leading some researchers to believe that life might have evolved on Mars when it was wet, and that life could be there even now, hidden in subterranean aquifers. [‪Photos: The Search for Life on Mars]

The amount of water on Mars has shifted dramatically over the eons because of the Red Planet's unstable obliquity — the degree to which the planet tilts on its axis of rotation. Unlike Earth, Mars does not have a large moon to keep it from wobbling, and so the direction its axis points wanders in a chaotic, unpredictable manner, regularly leading to ice ages.

Learning more about past Martian climates and where its water once was "could help us understand if locations on Mars were once habitable," study lead author Ali Bramson, a planetary scientist at the University of Arizona in Tucson, told Space.com.

To look at ice hidden beneath the Martian surface, Bramson and her colleagues focused on strange craters in a region called Arcadia Planitia. This area lies in the mid-latitudes of Mars, analogous to Earthly latitudes falling between the U.S.-Canadian border and Kansas.

These odd craters are about 1,075 to 1,410 feet (328 to 430 meters) wide. Unlike most craters of their size, which are bowl-shaped, the craters the scientists focused on had terraces on their walls. Such terraces can form when layers of different materials, such as dirt, ice or rock, lie beneath a planet's surface.

When a crater forms because of a cosmic impact, the shock wave from the collision can push aside weaker materials more easily than strong ones.

"The result is terracing at the interface between the weaker and stronger materials," Bramson said in a statement.

Terraced craters of the size the researchers saw are virtually unknown outside of this area of Mars, Bramson said. However, all 187 craters the researchers studied have terraces, "which indicates something weird is going on in the subsurface," study co-author Shane Byrne, also of the University of Arizona, said in the same statement.

The researchers used data from the High Resolution Imaging Science Experiment (HiRISE) camera aboard NASA's Mars Reconnaissance Orbiter to create 3D models of the area's craters, which allowed them to measure the depth of the terraces. They next used the orbiter's Shallow Radar, or SHARAD, instrument to beam radar pulses at Mars, which helped them determine the composition of the layers making up the  terraces.

The ice the scientists found measures 130 feet (40 m) thick and lies just beneath the dirt, or regolith, or Mars.

"It extends down to latitudes of 38 degrees. This would be like someone in Kansas digging in their backyard and finding ice as thick as a 13-story building that covers an area the size of Texas and California combined," Bramson said.

Such an extensive ice sheet had never been seen at these latitudes before, study team members said.

In addition, this ice sheet is probably tens of millions of years old. "We believe this ice to be a relic of a past climate when snowfall could occur at these latitudes," Bramson said.

The researchers will now model the behavior of the ice at Arcadia Planitia to learn more about how it it could have stayed preserved for so long, Bramson said. She and her colleagues detailed their findings online Aug. 26 in the journal Geophysical Research Letters.