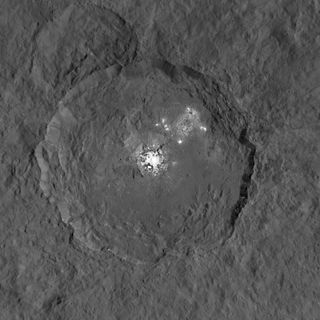 The strange white spots that speckle the surface of the dwarf planet Ceres are looking more and more complex, in new images from NASA's Dawn spacecraft.

Scientists still aren't sure what material makes up the perplexing white splotches seen on the surface of Ceres. But the Dawn probe is steadily descending closer and closer to the dwarf planet's surface, and while previous photos only show the blinding white light reflected by these spots, this most recent batch finally reveals some clear details on the surface.

In addition to the new photos, Dawn scientists released animations that give viewers a virtual flyby over the crater where most of the white spots appear, and a topology map of the landscape surrounding the spots. The largest of the blobs lies at the bottom of a steep divot, known as the Occator crater. [Photos of Dwarf Planet Ceres and Its Strange White Dots]

The mysterious white material on the surface of Ceres reflects sunlight so intensely that the spots usually appear overexposed in images, making it nearly impossible to see details on the surface. The new images are perhaps the first to overcome this extreme reflectivity, and reveal some of the strange region's structure and detail.

"Dawn has transformed what was so recently a few bright dots into a complex and beautiful, gleaming landscape," Marc Rayman, Dawn's chief engineer and mission director, said in a statement from NASA's Jet Propulsion Laboratory. "Soon, the scientific analysis will reveal the geological and chemical nature of this mysterious and mesmerizing extraterrestrial scenery."

The spacecraft snapped the new photos while orbiting at an altitude of 915 miles (1470 kilometers) above the surface of Ceres. The probe descended into its current orbit in June. (In its lowest orbit, Dawn will come to within 230 miles or 375 km of the surface). The new images have three times better resolution than the images from that previous orbit, and 10 times better resolution than images taken during the probe's first orbit of Ceres in April.

During each orbit, Dawn maps the entire surface of Ceres multiple times, from slightly different angles, in order to produce stereo views and 3D maps of its surface. The probe will complete six more maps of the entire surface over the next six months. In the newly released topological map, it's possible to see where the white spots lie in the low reservoir at the center of the Occator crater, which is nearly vertical in some places, rising as much as one mile (1.6 km) upward.

Scientists have put forth various ideas about what the white spots might be made of, and Dawn may soon provide enough data to answer that question. (The spacecraft has already detected evidence that the spots are creating a miniatmosphere on the surface.) Meanwhile, the Dawn mission team has asked members of the public to vote on what they think the white spots are. As of this posting, 6% of voters think it's a geyser, 6% think it's rock, 11% think it's a volcano, 10% think it's a salt deposit, 28% think it's ice and 39% think it's "other."

The $473 million Dawn mission launched in September 2007, and reached Ceres in March 2015, after first orbiting another very large asteroid, Vesta. Ceres' massive size has granted it a joint designation as an asteroid and a dwarf planet.