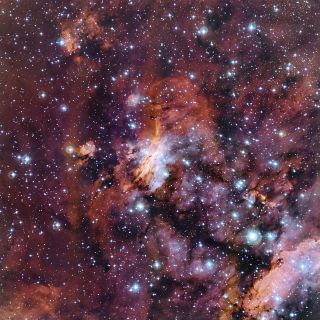 This new image, taken from the La Silla Observatory in Chile, spotlights part of the Prawn Nebula where newborn stars stud clouds of gas and dust.
(Image: © ESO)

A new view of the Prawn Nebula shows "cosmic recycling" at work: Glowing clusters of newborn stars illuminate surrounding gas, expelled from an earlier stellar generation, which will eventually form into even newer stars.

The 2.2-meter telescope at the European Southern Obsevatory's La Silla Observatory in Chile snapped a choice section of the reddish nebula studded by young blue stars in a newly released image. The nebula, also called Gum 56 and IC 4628, is hard to see with the naked eye although it's around 250 light-years across — it is very faint, and mostly emits light at wavelengths not visible to humans.

That invisibility conceals a lot of action, as new stars form from the stellar nursery of the nebula's gas and debris: "The material forming these new stars includes the remains of the most massive stars from an older generation that have already ended their lives and ejected their material in violent supernova explosions," ESO officials said in a statement. "Thus the cycle of stellar life and death continues." When the dust and gas grows dense enough, a portion will collapse down into the beginnings of a star. [Video: See How Cosmic Recycling Seeds the Prawn Nebula]

Large clouds of charged hydrogen gas provide the red glow to the nebula. As ultraviolet energy is emitted from the young stars, it hits the nearby hydrogen and excites it, prompting the release of light with hydrogen's distinct reddish tinge.

The source of most of that radiation is a pair of rare, extremely bright blue giant stars (out of view in this photo). The huge, powerful stars have short life spans — only a million years or so before exploding into a supernova — and they generally appear in areas with rapid star growth.

Despite the rare stars, the area has not been carefully explored (besides in an extremely detailed 2013 image): "Given the two very unusual blue giants in this area and the prominence of the nebula at infrared and radio wavelengths, it is perhaps surprising that this region has been comparatively little studied as yet by professional astronomers," ESO officials said in the statement.