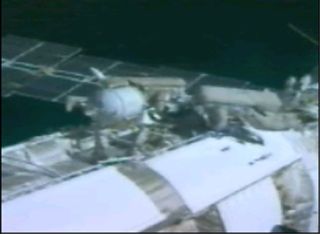 Expedition 9 commander Gennady Padalka (left) and flight engineer Michael Fincke (right) replacing a device to monitor the coolant flow in control systems aboard the Zarya control module. The task was just part of their fourth and final spacewalk in their tenure aboard the space station.
(Image: © NASA TV.)

The two astronauts aboard the International Space Station (ISS) are safely back inside their orbital home after a successful spacewalk today, the last excursion they will make during their mission.

ISS Expedition 9 commander Gennady Padalka and flight engineer Michael Fincke completed their fourth and final spacewalk ahead of schedule after five hours and 21 minutes of flawless work outside the space station.

"Goodbye EVA, until next time," Fincke said of the extravehicular activity (EVA) after reentering the space station.

Clad in Russian-built Orlan spacesuits, Padalka and Fincke ended their last spacewalk at 6:04 p.m. EDT (2004 GMT), after completing every major task set before them. They remained ahead of schedule throughout the entire EVA, and encountered only one hitch that Russian and NASA flight controllers agreed was insignificant.

That hitch came at the end of the spacewalk, when the astronauts were only able to install three of four guards on handrails outside the Pirs compartment due to an obstruction.

The EVA's primary goal was to install additional antennas to the station's Zvezda docking port, though the astronauts also performed maintenance and checked up on outside science experiments as well.

Padalka and Fincke performed their spacewalk flawlessly, capping off four EVAs conducted in Orlan spacesuits and staged from the Russian-built Pirs docking compartment.

Today's spacewalk at 12:43 p.m. (1643 GMT) when Fincke opened the outer hatch of the station's Pirs docking compartment and stepped into the void of space.

"I can see space from here," said Fincke as he cracked open the outer hatch of Pirs.

By 1:08 p.m., Padalka had reached the spacewalk's first worksite atop the Zarya control module, where they replaced an aging device that has been monitoring the module's coolant flow levels since the ISS component launched in 1998. Russian flight controllers later reported that the new device, called a flow control panel, was functioning perfectly.

With the panel swap complete, the Expedition 9 crew easily installed four tether fairleads to the different spots of the Zarya module. The fairleads will help future ISS spacewalkers keep their safety tethers untangles and snag-free as they move about the module.

At 2:45 p.m., the Expedition 9 crew regrouped at the Pirs compartment where they dropped of the old flow control panel - and its keg-shaped pressurized container - and retrieved the tools and instruments required to install a batch of new antennas to the space station's Zvezda module.

Preparing the station for ATV

Padalka and Fincke installed three new antennas to the docking port at the aft end of the Zvevda module, bringing the ISS one step closer to readiness for a European cargo ship expected to make its first delivery in late 2005.

Under development by the European Space Agency (ESA), the cargo ship will carry three times the amount of supplies currently carried by Russia's Progress vehicles. But first, the station must be ready to guide the robotic craft to its berth.

"It is not difficult work, but it is time-consuming," a NASA commentator said of the antenna installation.

With the addition of the three antennas today, Padalka and Fincke have attached a total of five antennas to the aft end of Zvezda during their last two spacewalks. Expedition 9's successors, Leroy Chiao and Salizhan Sharipov of Expedition 10 will install three more antennas in the spring of 2005.

During a 30-minute rest period atop the Zarya module, Padalka and Fincke were able to help Russian flight controllers study an attitude control phenomena that caused a hitch in a previous Expedition 9 spacewalk.

For 15 minutes, Padalka and Fincke remained completely motionless while they rested outside the station. The brief spacewalk interlude allowed ISS attitude control officers a chance to see how the space station controlled its positioning system with two

"Talk to us so we don't get bored," Padalka kidded to Russian flight controllers during the test.

"Well, it's raining in Moscow," they answered.

The test was necessary because the space station's gyroscope-based attitude control system was overwhelmed during Expedition 9's last spacewalk, and the station's orientation pitched upwards about 80 degrees. Space station handlers believe if they can better understand the phenomena, they can find a way to avoid it in the future.

With today's spacewalk hatch closing, Padalka and Fincke enter the home stretch of their ISS expedition.

Since their arrival at the station in April, the two have spent 136 days aboard and staged four EVAs to support the station. Only two of those spacewalks were planned, while the others were conducted to repair a faulty circuit breaker outside the station.

Today's spacewalk was the sixth career EVA for Padalka and the fourth for Fincke. Together, the spacewalkers have spent a total of 15 hours and 45 minutes working outside the station. They are expected to return to Earth on Oct. 19, following Expedition 10's arrival next month, NASA officials said.