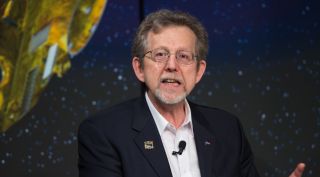 The study will run "at least a year" once JPL, Pasadena, California, stands up what is known as a science definition team, Green said. He advised scientists here who are interested in participating on the team to watch for a formal announcement NASA will publish "soon."

Green assigned a cost cap of $2 billion in fiscal year 2015 dollars to either orbiter mission.

The study is a long way from a NASA commitment to send a probe to either Uranus or Neptune: Largely unexplored bodies planetary scientists have long desired to observe more closely.

No NASA mission to the ice-giants would launch until the late 2020s or 2030s; the JPL-led study is intended to inform the planetary science community as it prepares to write its next 10-year science roadmap, or decadal survey, that will be published by the National Research Council around 2022, Green said.

Green said the JPL team will answer very preliminary questions: A mission's addressable science objectives; required technology development; and whether the objectives are realistic given NASA's budget outlook and short supply of nuclear power systems. Green said a nuclear power source would be needed for any Uranus or Neptune mission.

Before NASA mounts a mission to either planet, Uranus and Neptune will again have to receive the planetary science community's endorsement as top destinations in the 2022 decadal.

NASA's Voyager 2 is the only spacecraft ever to get anywhere near Uranus and Neptune. The spacecraft snapped closeups of Uranus in 1986, and of Neptune in 1989.