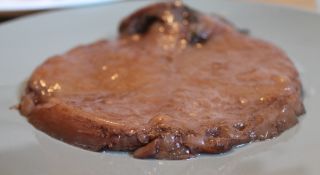 Microorganisms that cluster together and can stick to a surface are known as a biofilm. This Kombucha biofilm is similar to one that was recently sent into space by the European Space Agency.
(Image: © ESA–J. Harrod CC BY SA IGO 3.0)

Kombucha, a fizzy, fermented tea and trendy new favorite of hipsters and health nuts everywhere, has reached stellar heights as part of an experiment on the International Space Station.

Scientists at the European Space Agency (ESA) have placed the same bacteria and yeasts used to make Kombucha tea on the outside of the orbiting laboratory to see how the organisms fare in the unprotected environment of space.

The Kombucha experiment is one in a series of "Expose" studies run by ESA to find out if multicellular biofilms — a community of microorganisms that can stick together on a surface — can survive  in the unshielded environment above Earth's atmosphere.

Scientists have been surprised by the number of organisms that can live unprotected in the harsh conditions of space, including tardigrades — also known as water bears — and lichen. [Earth's 'Alien' Creatures May Reveal Clues About Extraterrestrial Life]

Last year, ESA sent a new group of biofilms to space inside a container, called the Expose-R2, to see how the organisms' molecular structure reacts to space conditions such as unfiltered sunlight, cosmic radiation, the vacuum of space (a lack of air pressure) and drastic temperature changes. The organisms will endure an 18-month trip, orbiting around Earth with the space station, according to a statement from ESA.

Even though the Kombucha biofilm is made up of microscopic organisms, it is thick enough to be seen with the naked eye. Earth-based tests have shown that Kombucha cultures can protect themselves from harsh conditions by making cellulose-based structures that resist high temperatures and radiation, the statement said. When mixed with simulated moon dust, the cellulose sucks up minerals and protects the culture even better. This has tantalizing implications for the possibility that biofilms could survive beyond Earth.

"Searching for signs of biofilms in our Solar System is easier than looking for the microscopic life that creates them and could still reveal microbial life beyond our planet," ESA said in the statement.

Similar results have been seen in Earth-based experiments on amino acids, the building blocks for proteins: The amino acids survive in spacelike conditions better when mixed with meteorite dust, according to ESA. Scientists have also found amino acids in meteorites that crashed to Earth and suspect there are amino acids hidden in comets and asteroids, such as Comet 67P/Churyumov–Gerasimenko, currently being orbited by ESA's Rosetta spacecraft. But to test these ideas, scientists need to study amino acids more extensively in space.

Many of the  other test samples sent into space inside Expose-R2 also contain organic molecules (meaning they possess carbon atoms), which are the basis for all living organisms. Many organic chemicals exposed to high-energy ultraviolet (UV) radiation break down into new chemicals. Without protection from the Earth's atmosphere, compounds in the Expose-R2 container will be subjected to high UV radiation from the sun. It's possible that when the organic chemicals break down, the leftover pieces will mix together to form new compounds, the statement said. As a result, scientists will get a glimpse at the kind of organic chemistry that can take place in space.

In total, Expose-R2 will fly 758 different samples to space in four separate missions. As part of the experiment, Kombucha cultures will hopefully help ESA scientists in the search for extraterrestrial life. In addition, the ESA statement said, the cellulose structures created by the Kombucha are a "promising nanomaterial for the space industry and studying it in open space has practical value for new technologies."

Kombucha's trip through space won't be complete until 2016, when the container makes its way back to Earth and scientists are able to analyze the biofilms.