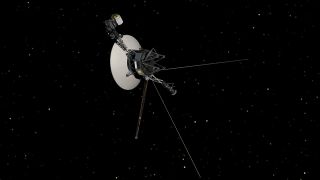 Paul Sutter is a research fellow at the Astronomical Observatory of Trieste and visiting scholar at the Ohio State University's Center for Cosmology and Astro-Particle Physics. Sutter is also host of the podcasts Ask a Spaceman and RealSpace, and the YouTube series Space In Your Face. He contributed this article to Space.com's Expert Voices: Op-Ed & Insights.

You've gone and done it. You've found yourself "spaced": tossed out of the airlock of a capsule or space station without a spacesuit. Panicking, you desperately try to get yourself back to safety. How long do you have to find a source of both air and air pressure?

Spoiler alert: not long. Twist ending: longer than you think.

Blown out of proportion

First off, you're not going to explode, and your blood's not going to boil. Just because there's zero pressure outside doesn't mean that your body suddenly loses all cohesion. You may have noticed a particularly useful organ that covers you from head to toe — you know, skin. It does a really great job of keeping your insides inside. It's a little bit elastic, but not much, and it's perfectly capable of preventing your guts from spilling out all over space. It also keeps your blood pressure high enough to stop your blood from boiling. [Our Favorite 'Gravity' Movie Moments: Astronauts, Spaceships & Space Junk (Oh, My! )]

But just because you won't explode doesn't mean you won't inflate. The nitrogen dissolved in your bloodstream near the surface of your skin will collect itself into little bubbles. These bubbles expand, puffing you out to around twice your size, starting at your hands and feet and moving in. It's a real thing: it's called ebullism. Sure, you'll look like the worst balloon animal ever, and you'll feel pretty miserable, but you won't be dead…at least not right away. Left unchecked, the inflated bubbles will cause significant tissue damage, but other things will kill you first.

The temperature — or rather, the lack of temperature — won't get you right away, either. The reason you can get hypothermia so quickly from lukewarm water isn't the temperature of the water itself, it's that water is really, really good at conducting and convecting heat away from you. Any heat your body's metabolism produces gets sucked away. That's why scuba divers wear wetsuits: to trap a layer of water and prevent it from carrying away that precious body heat. In a vacuum, there's no convection — and no conduction, either. That only leaves radiation. Every human is glowing, in the infrared spectrum, from radiating heat at about 100 watts. A light bulb used to be the perfect analogy for the energy output of a person, until we all switched to CFLs and LEDs. But you still get the idea. Usually we don't notice all this lost energy: swaddled in an insulating layer of air, and warmed by the sun above our heads and the ground beneath our feet, our thermal output is more than matched by the thermal input of our environment. We can happily radiate all day long. [NASA's Futuristic Z-2 Spacesuit: How It Works (Infographic ) ]

In space there's nothing to insulate you, so eventually you'll freeze to death. But fortunately, that loss of 100 watts of heat isn't all that much compared to the sheer mass of your body. You ever notice how long it takes to boil a pan of water, or how long it takes for a pile of snow to melt? In the vacuum of space, you're not turning into a popsicle anytime soon.

What ultimately dooms you is your body's own traitorous circulatory system. There's no air in space (it's kind of part of the definition), which means there's no oxygen. But your blood doesn't know that. It cycles past your lungs, ready to pick up another O2 hitchhiker, and keeps on going — with or without a passenger. Your heart keeps beating, and that oxygen-deprived blood goes wherever it's supposed to go.

For example, your brain.

Starved of oxygen, your think-box goes into shutdown mode to conserve energy. About 15 seconds after leaving the safety of the airlock, you lose consciousness. You're not a corpse yet, though. If some good (space) Samaritan pulls you back to safety within a minute or two, you'll be all right. Sort of. I mean, there's all the ebullism and flash-frozen skin. Oh, and a bonus nasty sunburn from all that raw unfiltered UV radiation. But that's survivable, if a bit uncomfortable.

Unfortunately, if you're left in space past the 2-minute mark, all your other organs will have to shut down from the lack of oxygen too, which in medical circles is called "dead."

And for Armstrong's sake, do not hold your breath. I'm no biologist, but I'm pretty sure that the valves and tubes that make up your throat were not meant to hold a lungful of atmospheric-pressure air against a pure vacuum. If you attempt to keep a big breath in, you'll experience the same thing that scuba divers do if they ascend too quickly from deep waters: ruptured lungs.

Gross, I know, but nobody said spacing would be pretty.

Learn more by listening to the episode "How long could you survive in space without a suit?" on the Ask a Spaceman podcast, available on iTunes and on the Web at http://www.askaspaceman.com. Thanks to Adam Diener for the great question that inspired this piece. Ask yours on Twitter using #AskASpaceman or by following @PaulMattSutter.