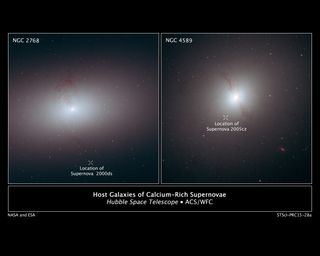 Elliptical galaxies with dark, wispy dust lanes suggest galaxy mergers. The combination of two supermassive black holes at their center could have cast out pairs of older stars that later exploded into supernovae without host galaxies.
(Image: © NASA, ESA, and R. Foley (University of Illinois))

Isolated supernovae, exploding alone in the empty space between galaxies, may be the result of star pairs ejected from their homes as galaxies merge, new research suggests.

"This story has taken lots of twists and turns, and I was surprised every step of the way," Ryan Foley, principle investigator of the new study, said in a statement from the Hubble Space Telescope news center.

Foley and his colleagues studied massive stellar explosions that normally take place inside the confines of a parent galaxy, but were instead lighting up the sky between galaxies, presenting an ongoing puzzle for astronomers. What happened to the stars that created these explosions? How were they ejected them from their homes, and what caused them to explode? The researchers think they have some answers. [Supernova Photos: Great Images of Star Explosions]

Dramatic stellar explosions known as supernovae often occur when massive stars run out of fuel to burn and end their lives with a bang. Foley, an assistant professor of astronomy at the University of Illinois at Urbana-Champaign, was interested in isolated explosions that were caused by a slightly different mechanism: the remnants of burned-out stars called white dwarfs, merging together and creating the explosion. This suggested that both stars had somehow left their galaxy together, before their explosion, the statement said. Some had traveled as far as half a million light-years from their birth place.

Foley studied 13 lonely supernova to determine how fast the binary stars must have been moving before the explosion. To do this, he looked at observational data taken at the Lick Observatory in California, and the W. M. Keck Observatory and the Subaru Telescope, both in Hawaii. He found that the doomed stars reached speeds similar to stars tossed from the Milky Way by the supermassive black hole at its center, more than 5 million miles per hour (7 million kilometers per hour).

To determine what might eject these stellar twins, Foley studied the galaxies where they started out.

"Whatever put the star system in the state [location] where it's about to explode is related to the center of the galaxy it came from," Foley said.

Observations of the parent galaxies revealed signs of recent mergers, where two galaxies had collided to form a single new one. Archived images captured by NASA's Hubble Space Telescope showed that each parent galaxy had a supermassive black hole at its center. Foley concluded that, as the galaxies united, the supermassive black holes also combined. The gravity of this new binary black hole interacted with the binary stars and cast them from their home galaxy.

"You have two dancing partners, they do-si-do, and one pair gets flung away," Foley said.

"The white dwarf and its partner are ejected out like from a slingshot, and after traveling at a high speed for about 50 million years, explode in the middle of nowhere."

The time scale of this destructive process (about 50 million years) is much shorter than the time scientists think a white dwarf merger would take under normal circumstances, the statement said. The ejection could also explain what sped up the explosive process between the binary stars.

"Many of these stars will be flung far away, and those ejected stars in surviving binary systems will orbit even closer after the encounter," the statement from the Hubble news center said. The closer the two stars get, the faster they spin around one another, the stronger the gravitational pull becomes between them. The force of the gravity pulls material from one star onto the surface of the other, and previous work has shown that this accumulation of matter eventually causes the growing white dwarf to explode as a supernova.

"The interaction with the black holes shortens that fuse," Foley said.

While the black hole at the center of the Milky Way only ejects about one star every 100 years, a binary supermassive black hole may toss out around 100 stars every year.

Though the source of the isolated supernovae has been identified, some mysteries remain. The explosions tend to produce more than five times the amount of calcium produced by other supernovae and significantly less iron. Most supernovae create elements that are heavier than calcium, such as iron and nickel, in their hearts. The lack of heavy elements suggests that these isolated explosions have lower energy than other supernovae.

Foley hopes that by tracking down more of these isolated supernovae, scientists could also find more binary supermassive black hole systems, which are rare and interesting phenomena that could provide clues about several mysteries of physics, such as general and special relativity.

"These supernovae could be the bread crumbs to find our way to these supermassive binary black holes, and we could potentially find them in much higher numbers," Foley said.

The findings were published online on Aug. 12, in the journal Monthly Notices of the Royal Astronomical Society.