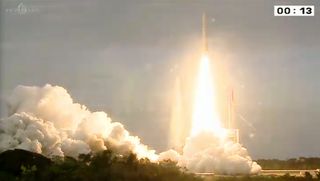 A European rocket launched into space from a South American spaceport Thursday (Aug. 20) on a mission to deliver two new communications satellites into orbit for a pair of telecommunications giants.

The unmanned Ariane 5 rocket blasted off from the Guiana Space Center in Kourou, French Guiana at 4:34 p.m. EDT (2034 GMT), marking the seventh mission of the year for launch provider Arianespace. The rocket's dual payload included the EUTELSAT West B satellite for the Paris-based satellite operator EUTELSAT and the Intelsat 34 satellite for the Virginia-based firm Intelsat.

"Tonight, Arianespace is particularly proud to be in charge of a launch mission for the two first Ariane 5 commercial customers, also belonging to the top three private operators acting in the field of satellite communications," Stéphane Israël, Arianespace's CEO, said just before the launch. [Watch the Ariane 5 rocket launch two satellites into orbit]

The EUTELSAT 8 West B rode on top and was deployed first. The satellite, weighing 12,800 lbs. (5,782 kilograms) at launch, will strengthen broadcast coverage to the Middle East and North Africa. It boasts 40 Ku-band transponders and 10 C-band transponders. EUTELSAT currently operates a fleet of 37 satellites.

Intelsat 34, the second communications satellite deployed, will increase television service over Latin America as well as provide North Atlantic maritime and aeronautical broadband access. The 7,280-lb. satellite (3,300 kg) is designed to replace the two older satellites Intelsat 805 and Galaxy 11. The new satellite is built to last for 15 years and carries 24 transponders. Intelsat currently has about 50 satellites in orbit, and the company's Intelsat 36 satellite is slated to launch next year aboard an Ariane 5 rocket.

Arianespace's 17-story Ariane 5 ECA rocket is built to deliver satellites into a geostationary transfer orbit. It can carry two satellites at a time and has a total payload capacity of up to 20,100 lbs. (9,100 kg).