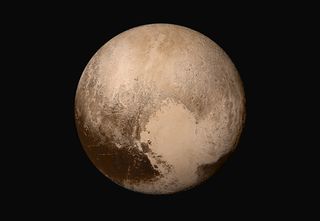 NEW YORK — The first-ever flyby of Pluto left scientists and the public wide-eyed, and the surprises will likely keep on coming.

NASA's New Horizons spacecraft zoomed through the Pluto system on July 14, coming within 7,800 miles (12,500 kilometers) of the dwarf planet's surface. Images captured by the probe have revealed a world with its own cryogenic geology, situated in a diverse array of moons.

At the American Museum of Natural History here, Emily Rice, an astrophysicist at the College of Staten Island, and Jackie Faherty, an astronomer with the Carnegie Institute, took an audience on a journey with New Horizons last week to highlight the science. [New Horizons' Pluto Flyby: Complete Coverage]

The Aug. 11 presentation was in the museum's Hayden Planetarium and used its skylike dome to immerse people in the vastness of space. The show, called "Visiting Pluto and Friends in the 21st Century," was part of the museum's "Astronomy Live" series.

Using new visualization technologies, Rice and Faherty offered views of Pluto and its five moons as New Horizons might have seen them and placed the dwarf planet system in relation to the sun and Earth.

Carter Emmart, who directs Astrovisualization at the museum's Rose Center for Earth and Space, Skyped in from Singapore to show off some of the technology, and to talk about how New Horizons made its way through the Pluto system.

"I'm calling from the future," he quipped, noting the time difference. (Singapore lies on the other side of the International Date Line.)

The 3D view showed the shadows of Pluto and gave a feel for how the spacecraft was oriented, and how the craft had to move in space to get the pictures that NASA sent around the world.

Rice said the accuracy of the flyby was quite good; the probe arrived within 90 seconds of its targeted time.

"It's like hitting a hole in one on a golf course in Los Angeles from New York," she said.

Later in the show, Rice called up an old artist's rendering of Pluto, which had been created long before New Horizons' historic flyby. [‪Flying Over Pluto: Ice Mountains and 'Young' Plains (Video)]

"We were so wrong," she said. The old picture doesn't show ice mountains, or even a surface that bears much resemblance to the one New Horizons showed.

Faherty and Rice also demonstrated how New Horizons studied Pluto's thin atmosphere, using a picture of Pluto "eclipsing" the sun. A hazy ring marked the edge of the dwarf planet, showing that there was some gas diffusing the light. The atmosphere contains methane-based chemicals called tholins.

"The tholins probably rain out," Faherty said, adding that they are what give Pluto its reddish-brown color.

The big highlight of the mission, though, was finding that Pluto's surface has been reworked in the recent past — it's smooth in places, and cratered lightly or not at all. This suggests that some sort of internal heat source remained active until relatively recently, and may still be active today, mission scientists have said.

"But we don't know what it is," Faherty said.

Many more pictures are coming from New Horizons; they'll just take a long time to transmit. Mission team members have said the complete flyby data set probably won't come down to Earth until late 2016. Emmart said the data-transmission rate is akin to that of a dial-up connection, and New Horizons is a good 3 billion miles (4.8 billion km) from Earth..

Pluto wasn't the only object that got attention during the planetarium show; Charon did as well. Faherty noted that Charon is "Pluto's opposite" in that it's made mostly of water ice rather than mostly rock, methane and nitrogen. She pointed out the tantalizing features that New Horizons saw, such as a large, miles-deep canyon and the dark spot near the moon's north pole, which has been dubbed Mordor.

The two scientists also mentioned the dwarf planet Ceres, which is currently being studied by NASA's orbiting Dawn spacecraft. Dawn has spotted intriguing bright spots on Ceres' surface that could be ice or salts of some sort; Dawn is moving down to a lower orbit to map the surface and get a better look.

Then there is the European Space Agency's Rosetta mission, which began orbiting Comet 67P/Churyumov–Gerasimenko in August 2014 and dropped a lander named Philae onto the icy object's surface three months later.

Comet 67P harbored its own surprises. "When they [Rosetta scientists] saw it, they said, 'Oh damn, it looks like a rubber duck,'" Rice said.

Philae didn't manage to land in quite the way the mission planners hoped; it actually bounced off the comet twice and came to rest in a place where it couldn't get as much sunlight as it needed to run its instruments continually.

But Philae did gather data for more than two days on the comet's surface, and the Rosetta mothership continues to study the object from orbit. Rice showed one photo taken by Philae during its November 2014 descent, at a distance of just 30 feet (9 meters) from 67P's surface. It showed the place where scientists think the lander initially hit the surface. [Surprising Comet Discoveries by Rosetta and Philae (Infographic)]

Rosetta's mission will end when the lander is sent into the comet in September 2016. "I would call it crashing; Jackie would call it landing," Rice said.

Even Mercury got a place in the sun (no pun intended). NASA's MESSENGER (Mercury Surface, Space Environment, Geochemistry, and Ranging) mission, which ended in April of this year, gathered a wealth of new data about the small planet, which is smaller than the Jupiter moon Ganymede, the solar system's largest satellite.

Rice brought up an emotional moment with one of the mission specialists on MESSENGER. "I asked if he was sad that the mission was over," she said. "He said he woke up one morning and wanted to look for new images from MESSENGER, and there weren't any."

Its fuel tank empty, MESSENGER was deliberately crashed into the planet's surface on April 30.

The show ended with a journey to the Oort Cloud, a huge comet repository that lies perhaps 2 light-years from the sun. None of the objects that inhabit this distant realm have been imaged yet.

After the presentation, audience members got a chance to ask questions, some about the future of New Horizons. One person asked how long New Horizons would last. Rice noted that the probe's plutonium power source could keep it going for years yet — perhaps another decade or two. But keeping New Horizons going has less to do with science and engineering than with Earthly politics.

"It's all dependent on the funding," Rice said.

Another question was whether New Horizons has solar panels in case it might pass another star. "It would take about 100,000 years for it to get to another star," Rice said. "And it's going in the wrong direction." So the probe wasn't designed with solar panels.

New Horizons will fly by another object in the Kuiper Belt — the ring of icy bodies beyond Pluto — in 2019 if NASA approves and funds a proposed extended misison.

"Maybe other Kuiper Belt objects won't be as sexy as Pluto, but who knows?" Rice said.