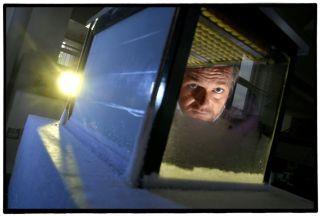 Earth'srecent warming trendmight in part be due to a lack of starlight reaching our planet, a new studysuggests. But other scientists are not so sure.

Accordingto a theory proposed a decade ago, when a star explodes far away in the Milky Way, cosmicrays--high-speed atomic particles--go through the Earth's atmosphere and produce ions andfree electrons.

Thereleased electrons act as catalysts and accelerate the formation of smallclusters of sulfuric acid and water molecules, the building blocks of clouds.Therefore, cosmic rays would increasecloud cover on Earth, reflecting sunlight and keeping the planet relativelycool.

Scientistsat the Danish National Space Center mimicked chemistry of the lower atmosphere in a largereaction chamber. They created a mixture that contained gasses at realisticconcentrations and used an ultraviolet lamp to act as the Sun.

Microscopicdroplets, precursor to clouds, started floating in the air of the reactionchamber.

"We wereamazed by the speed and efficiency with which the electrons do their work ofcreating the building blocks for the cloud condensationnuclei," said team leader Henrik Svensmark, Director of the Center forSun-Climate Research at the Danish National Space Center. "This is a completely new resultwithin climate science."

The resultshowever, may not transfer to natural conditions outside the controlledlaboratory environment.

"Studiesthat have evaluated the claims that global cloud cover is related to changes incosmic rays find that if you re-examine this matter outside of the brief periodwhich they used, the relationship falls apart," said Raymond Bradley directorof the Climate System Research Center at the University of Massachusetts. Bradley was not involved with thestudy.

Theresearchers agree that further study is needed to estimate the contribution ofthis mechanism to the recent warming of the Earth's atmosphere and oceans.

This workdoes not mean that there is no human influence on climate, Svensmark told LiveScience."But it might be necessary to revaluate the climate sensitivity to carbondioxide."

The studywas detailed online this month in the Proceedings of the Royal Society A.